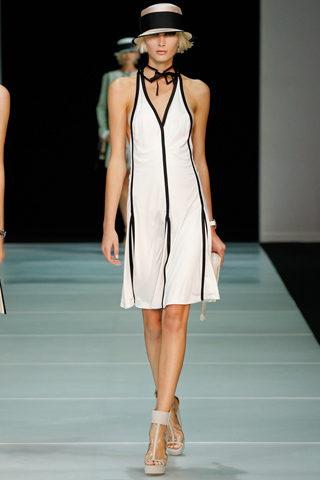 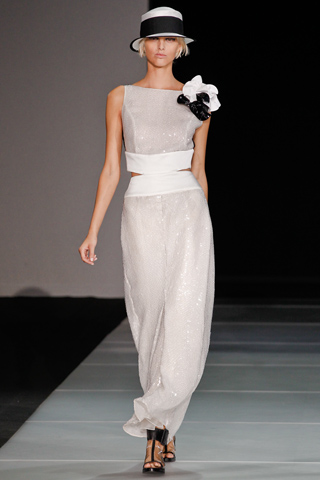 Hello! Me again - ok, so unfortunately I was going to blog today's outfit, when my unofficial photographer went on strike (otherwise known as: my sister went around to her friend's house with the promise that she would take the photos later, even though she had promised to do them at two o'clock in the afternoon, at a time when I was certain I would be awake. Typical twelve year old irritating sister who does not understand the importance of keeping to a deadline and doing exactly what I ask her to do since, in the long run, it will mean that I will feel more disposed to being kind to her, and will get her a more expensive/better present for her birthday/christmas. Anyway, even if she wishes to do them later, I am not available anymore. She really should be less selfish and think of me once in a while. Rant over.) So instead, I am just doing a brief analysis of Emporio Armani Spring pret-a-porter 2012, and although generally Armani is not high on my favourite designers list, I see it as a very significant brand when looking at the world of fashion as a whole. 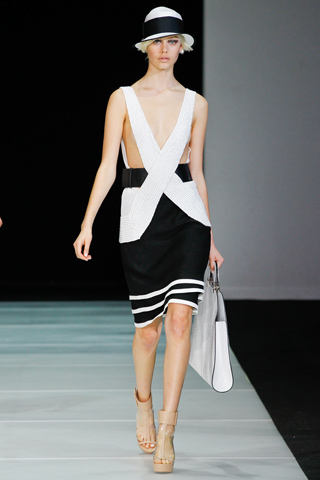 - Georgio Armani's latest offering for Emporio Armani. Not unusual for the designer, a monochrome Army of Black and Whites strode down the catwalk, momentarily punctured by soft creams, warm beiges, icy blues, mint greens and light lilacs. Almost every model had a hat, low brimmed at a jaunty angle, white with a thick black band. 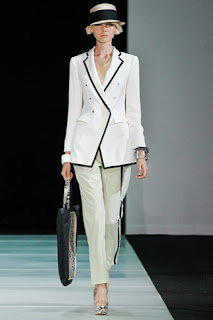 There is an air reminiscent of the 20s and a suggestion of the SciFi - as much in the name of the collection, Neodesign, as in Black 2d lines and bright whites creating an impression of uniformity.


In line with the Spring 2012 Fashion, there was an abundant supply of chokers, each one identical - black, collar-like, softened slightly by a ribbon. 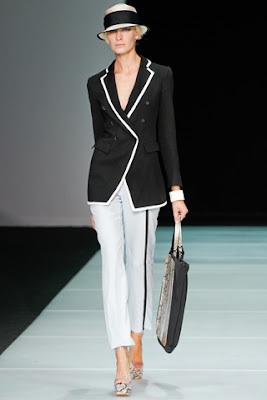 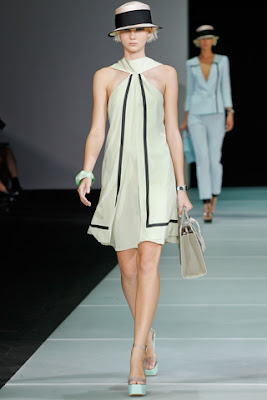 Every single one of the models was in a blonde wig; a cool blonde wig in a sharp pixie crop which (under the hats) was again reminiscent  of the 20s.

Black and White flowers made an appearance at the end - On the shoulder, in hair or directly in the

centre of the chest. 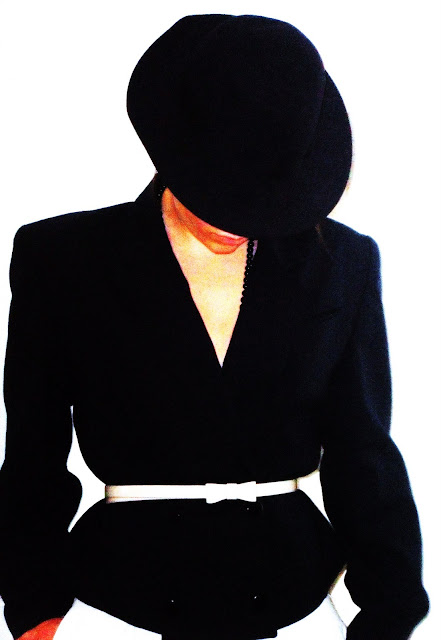 *** 10 minutes after I had finished writing this, I went down to the Kitchen to get a Pepsi Max before coming back up to post this. My unofficial photographer had returned. Oh. Sudden change of plan. I quickly asked her to spare five minutes of her precious time to take a few photos. I change into an outfit inspired by this collection and she takes two or three snaps. So... here it is. ***

>>> The Jacket is a vintage find... another one adopted from my Grandmother's. The Trilby (I do not own a boater, I am afraid) is a present from the Director of a play I was in. The Trousers were my Mother's (vintage 70s/80s I think) The Shoes were bought last year, from High Street Brand, Dorothy Perkins. The belt and Necklace... no idea.

PS: I do not think this is a look that is going to become a keystone in my wardrobe. It was fun to try it out, but I prefer not permanently looking like a strange sort of gangster. I might wear it once or twice, though it's not a promise.

Unfortunately, not a great photo of me. I had forgotten to make sure my sister had taken flash off... and you know what it is like when it's five o'clock on a Sunday Afternoon, tired, without make-up and with the prospect of school tomorrow.
Posted by Zoé at 09:09

Wow I like the outfit you're wearing, very trendy!
Just letting you know I forwarded a blogger award to you :) cant wait to see your 7 facts about yourself :D
http://shenanigansofcaroline.blogspot.com/2011/09/one-lovely-blog-award.html

I love that you are into vintage pieces and your finds are absolutely fantastic! I'm kind of obsessed with this post and all the looks featured! The first one is beyond amazing ! Thanks so much for sharing!