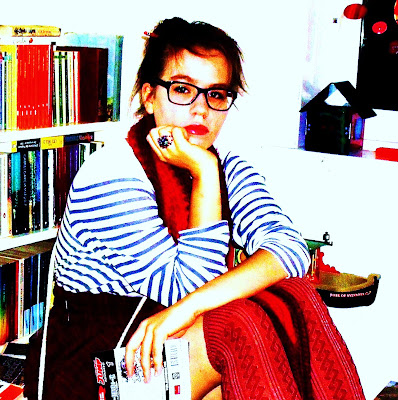 I rush down the stairs with my sister, a very long wool scarf wrapped around my neck and a favourite manga in my hand. "Come on!" I coax her while simultaneously pulling up my knee-highs (lovely but, let's face it, wholly irritating) "I need these photos. Now."
Ignoring her grumblings about going to bed, the lack of light and the need to tidy her room, I lead her to the relatively well lit kitchen. True, I had been planning to take these photos in the Library, but at this late hour, the light in there was very poor. Eventually we manage to take a few photos and I can return to my room, less than satisfied but with enough material to not make this into a complete shambles. 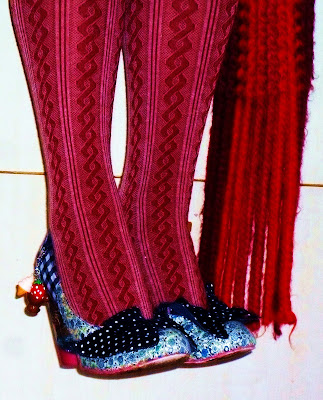 Right. So this is about a look that has long been a favourite of mine, a look I have always had a soft spot for, Geek Chic. Characterised by the typical, heavy black-rimmed glasses which, for much of the press, seems to be the only defining feature. In my strange mind, there are then two directions that feminine geek chic goes in and it is as simple as 'trousers' and 'skirts'... of course, they are so absolutely interlinkable that it is possibly a waste of my time trying to explain how I separate the two... I will try anyway.

A) Trousers. Characterised by T-Shirts with geeky in-jokes, Jeans (often tight, since it makes the look that bit more alluring), trainers such as converses. More detailed jewellery - Mario Watch and Scrabble Necklaces. Bags more likely to be colourful rucksacks or large, practical shoulder bags, maybe with more in-jokes - I found a very nice one with a picture of a Robot. 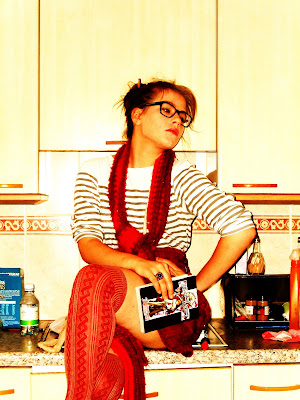 > Oh, if you are interested, these shoes are Irregular Choice, which is one of my two favourite online shoe brands.

Definition of the word Geek:
"A person with a devotion to something in a way that places him or her outside the mainstream. This could be due to the intensity, depth, or subject of their interest. This definition is very broad but because many of these interests have mainstream endorsement and acceptance, the inclusion of some genres as "geeky" is heavily debated. Persons have been labeled as or chosen to identify as more commonly physics geeks, mathematics geeks, engineering geeks, sci-fi geeks, computer geeks, various science geeks, movie and film geeks (cinephile), video game geeks, roleplay geeks, comic book geeks... and less commonly as theatre geeks, history geeks, music geeks, art geeks, philosophy geeks, literature geeks, historical reenactment geeks." 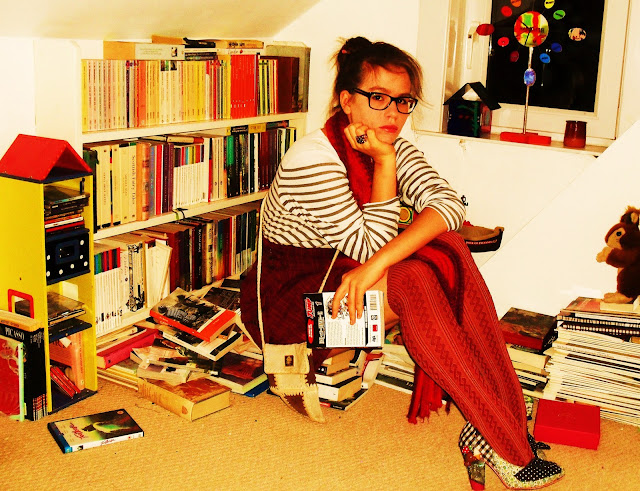 Bref, the list goes on - I am even thinking of becoming an official Fashion and Style Geek. Apparently, you can even be a Sports Geek, which is slightly at odds with the image I have of geeks in general.
Lastly, a warning. Be very careful, dare I even say 'do not', try geek chic if there is really nothing more to it, for you, than a fashion statement. That is called following the crowd and it is pretty irritating to proud geeks. After all, there is nothing more annoying than seeing someone wearing an in-joke t-shirt and immediately thinking they would be company, just to realise that they are only wearing it because they want to 'try' a little geek chic. If you are not sure whether you are a geek or not, try this: Imagine that you have gone to a large geek convention, and you are talking to other geeks about your interests. I would say "I am interested in Doctor Who and, although I would not go as far as to call myself an Anorak, Star Wars and books by Terry Pratchett." 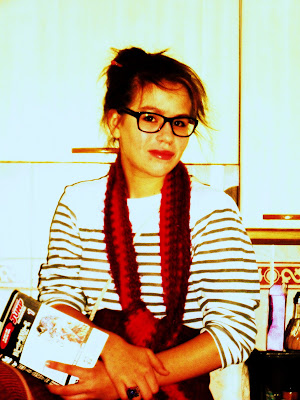 - Anyhow, although I am not an obsessive of anything in particular and definitely not living a geek-orientated lifestyle, the truth is that I am so completely surrounded by them that there is no escaping it... there was never any escaping it.


<< A note on my outfit, excluding the amazing shoes which I have already mentioned... oh, and the glasses are prescription so that is not really an issue. There is a pencil keeping my hair in a bun (there are tutorials on Youtube if you wish to know how to do this) which  is very geek chic not to mention, very satisfying to know you are able to do and useful when they are no other hair accessories in the surrounding areas. The very long scarf around my neck was also supposed to be reminiscent of Doctor Who, though admittedly a Doctor I have not watched much (I am more of a David Tennant fan)

So, I know this post was not brilliant - I am completely blaming my lack of unofficial photographer, and the fact that I am writing this late, rather than any weakness on my part - but do keep reading, follow, comment and tell your friends. Thankyou. xox. :)
Posted by Zoé at 15:31

You seem to not love your photographer, I am shore he/she is doing their best. Anyway i love your blog, its really good. I hope you will continue posting it gives me pleasure!

- Thank you for the lovely comment. Oh, and my photographer is always one of my two siblings so that is not a problem... I love them really.
Once again, thank you and, if you like, follow.