Downton Abbey (or why I love Lady Sybil's Harem Pants)

Most of you out there might have seen, or at least heard of Downton Abbey – winner of both BAFTAs and Emmys – home to Brilliant acting, gripping storylines... and Fabulous Costumes! Alright, so this Sunday (18th September) the period Drama is coming back with another series. The second series will be composed of eight episodes, running from the Battle of the Somme in 1916 to the Armistice in 1918. In between those dates, other historical events the second series will cover is the Battle of Verdun, the Russian Revolution and the British capture of Jerusalem. One thing I shall be keeping an eagle eye on is how Lady Mary’s complicated love life will unfold, and a second thing I will be watching eagerly, are the costumes.
Bearing in mind this will be a war scenario, I am sure there will be less of the lavish, and since Lady Sybil has defied her aristocratic origins to serve in Queen Alexandra's Royal Army Nursing Corp, we may see less Harem Pants.
A note on the Harem Pants.  Paul Poiret was the inventor of the Harem ‘Pantaloon’ as an article of clothing in Western Culture. For one of his famous parties, on 24 June 1911, "The Thousand and Second Night" (based on The Arabian Nights), he required his over 300 guests to dress in Oriental costuming. Improperly dressed guests were requested to either outfit themselves in some of Poiret's 'Persian' outfits or to leave. However, though it had been done, it was still avant-garde, and even shocking to some people, to wear them. In Downton Abbey, this is seen delightfully when observing the facial expressions of the astounded family as Lady Sybil enters the room. 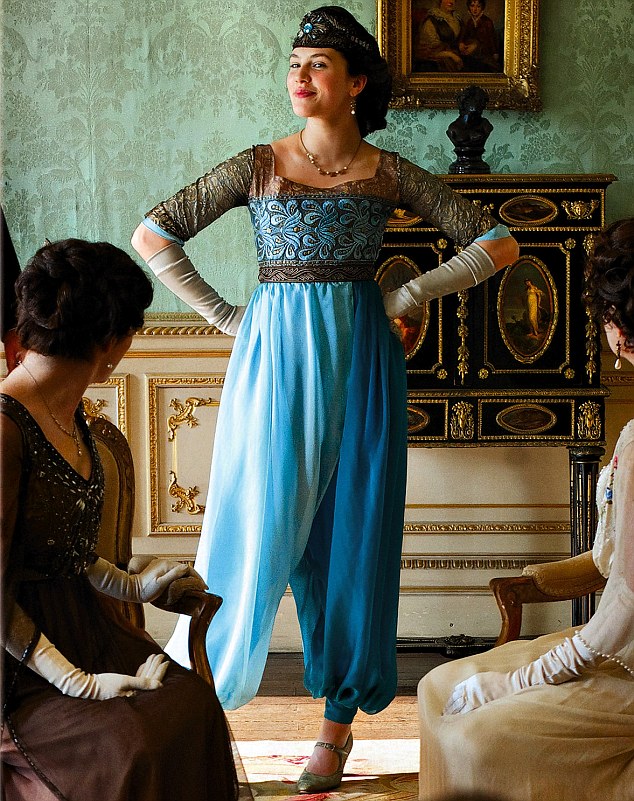 THAT is my favourite scene in the entire series. Although I think the ‘habit’ itself would have suited a long flowing dress better, it would not have had the same effect. It is a scene that shows a new world – a future and new ideas, impersonated by the feminist Lady Sybil. It is an idea that foreshadows the looming liberation of the 1920s... it is a scene I could watch over and over again.
Bref, I want a replica of this costume.

What else to say since I promised myself to keep this under five hundred words?
A)     Dressing for Dinner. Why do we not do that anymore? I am afraid that my future family may be quite, quite miserable but I think I shall do nought but insist on them donning a dinner outfit at least every Friday, Saturday and Sunday Night. If it is not an excuse to buy more clothes, then it is an excuse to display all those formal dress one never has the opportunity to wear. Cross my heart and hope to die.
B)      Lady Edith – I cannot wait for the third series. I think that the Edwardian cuts were not that flattering to Lady Edith. I may be miles off the mark, which would not be the first time, but I think she will be more successful in the 1920s. I would love to see her in a red Madeleine Vionnet bias cut with her beautiful strawberry blonde locks, neatly bobbed... and a lot more confidence. After all, she is not at all bad looking.
Here are my three other favourite outfits (worn by Lady Mary) from the first series, and brief explanations. 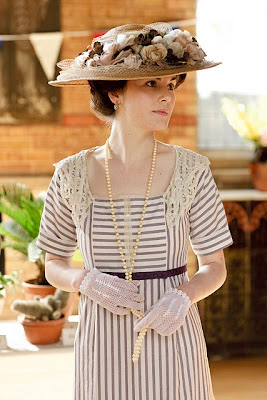 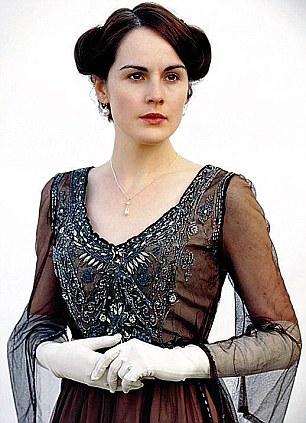 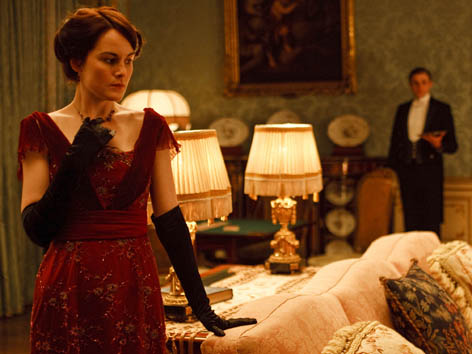 All three of these dresses are absolutely gorgeous, though admittedly the red one was only because I could not take an accurate picture of the dress I wanted. The Black Gown on the upper left is so elegant, so stylish... made of original beading so delicate that it could not be worn again (which is a crying shame - worth crying about, if there was any gown ever worth crying about) The Daydress on the right has given me so many ideas. Firstly, I love pearls and how they can make such a diverse range of outfits look more sophisticated. Secondly, the gloves and hat are to die for. Thirdly, the Dress is so light and fresh; there is something very calming about it.

Remember to check back tomorrow for an update of my blog. Do Comment. Please Follow me (on Blogspot, this is not an invitation to stalkers to follow me without fear of redemption *Smiley Face*)