Hello! Me again - who else would it be anyhow? I hope you have all had a wonderful week and a lovely day. I made the most my day, spending all morning at my Drama Club, then all afternoon in Town, where my Maman eventually purchased a gorgeous coat from 'British Heart Foundation' for me. *Smiley Face* Update on the top ten countries: Italy has been knocked out of the top ten to be replaced by Germany. 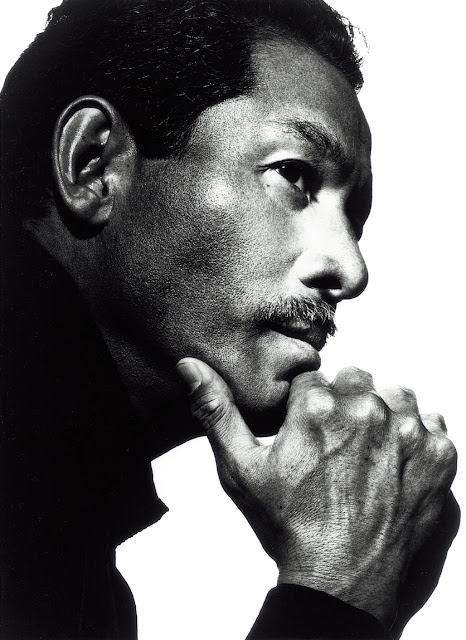 On to today's post. I am continuing my exploration of Japanese Fashion with Issey Miyake though, admittedly, some of the designs will not be his. From 1999 to 2007, Naoki Takizawa was creative director and (since he opened his own brand) Dai Fujiwara. 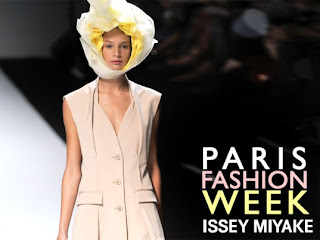 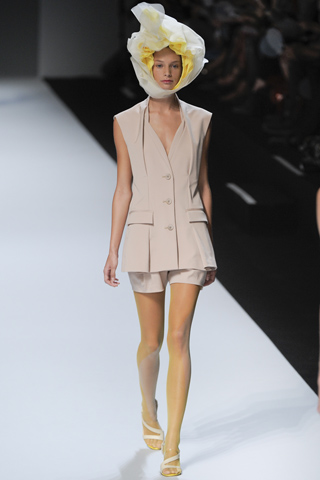 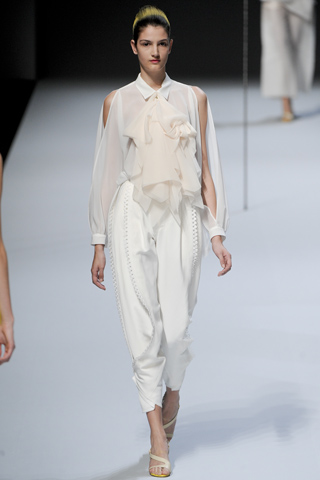 Here is my analysis of the latest collection: Issey Miyake Spring 2012, and the first collection for Yoshiyuki Miyamae.
It was beautiful, detailing the life of a flower as a metaphor for the life of a woman, done in an enchanting way.
Naturally, the head-dresses gave a great deal in helping guess the theme in question, to the point that even the dense would have had a problem not recognising the core inspiration. 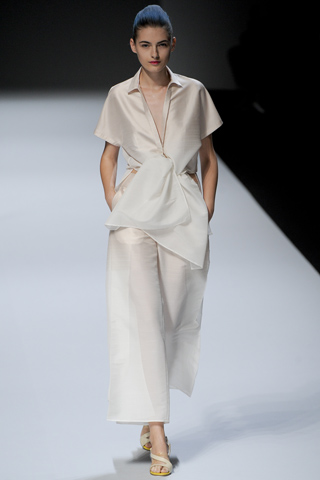 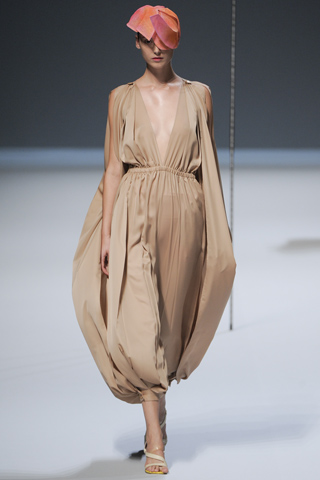 On the other hand, there were a great many more subtle references. "The fagoting on seams, representing the veins on a leaf." or the slits on clothes symbolising a bud bursting.

Bud, stem, petal, blossom, bloom... these were the key stages represented and, when I chose my top ten looks from the collection, I did remember to choose a variety rather than (for example) nine nude ones and one purple. 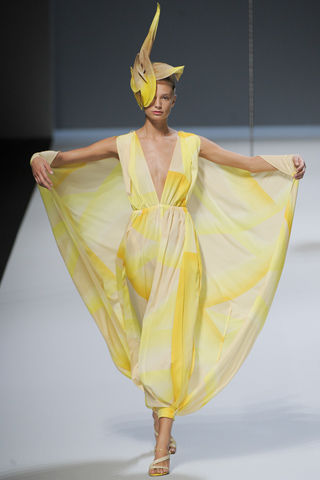 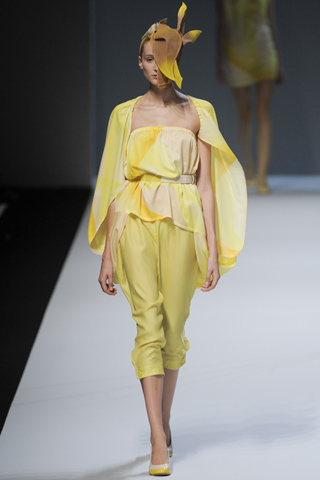 As the collection progresses, the delightful materials seemingly floating down the catwalk, the colours got brighter, radiating into yellow. This continued, cooling into ice blues then finally burning into an infusion of purples, vibrant oranges and pinks then chocolate browns. 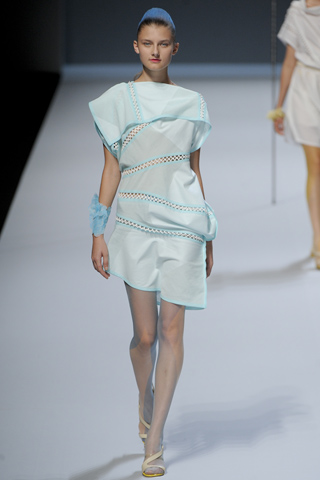 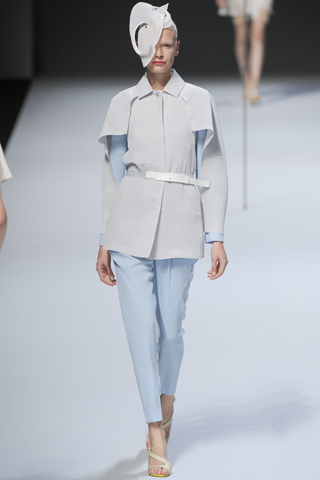 The looks went from breezy and lady-like to chic, sporty looks with tight leggings, glazed over with bright, and tribal, patters. The hats always very origami-esque... as are a great many Issey Miyake Designs. 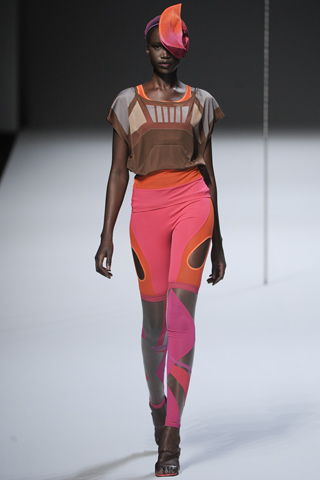 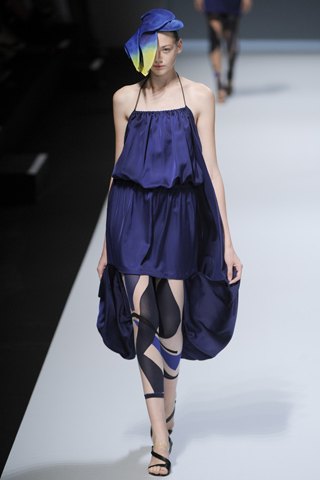 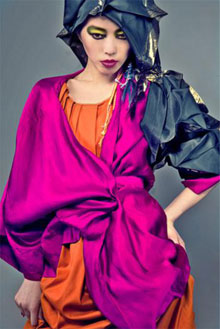 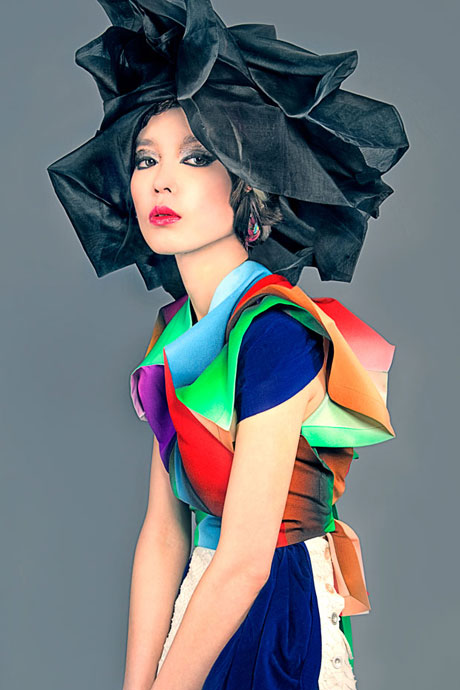 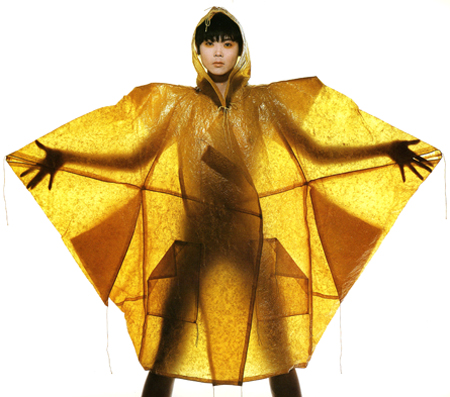 I realise that if you have just been reading this, and looking at the pictures I have used, you may get the impression that Issey Miyake is always very colourful. Although it is true that his designs are often a lot more vibrant than other japanese designers, he does do a lot of black and white shades too. In fact, his 2011 Autumn/Winter Collection was entirely monochrome. 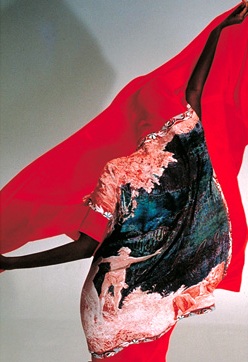 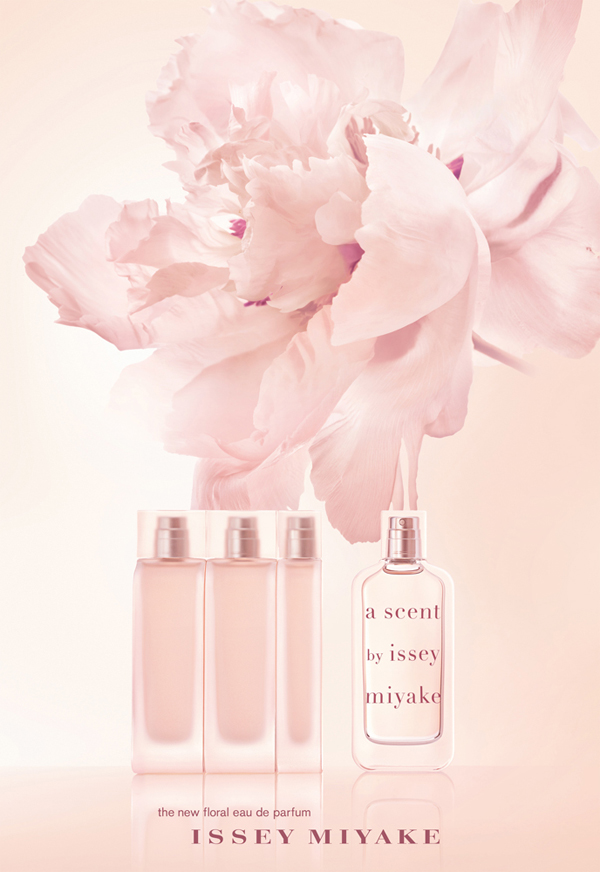 Anywho, thank you for reading. Please comment, and tell me which of the Issey Miyake looks is your favourite. I would be interested to know. Remember to check back regularly and, if you are from Italy, tell your friends to take a look and you might be able to knock Germany back out of the top ten - who knows? :)
Posted by Zoé at 15:31

i am a new fashion blogger from indonesia living in singapore :) i really like your blog. i will really appreciate & it will be an honor to have u as my blog member (blog follower)

i've just recommend your post to google!u can check it! that's what u got if you keep in touch with my blog too!! hope u will do the same ^^
(u can add me on facebook and contact me at : cheeringwinda@yahoo.com)

I was looking for some fashion blog to follow and found yours! =D
I hope you can visit mine too! Kindly Follow if you like my blog here http://tinyurl.com/7u2b2jp

Love your blog! Its really sweet - you write so good, and Ive found loads of stuff I didnt know before. Thanks!

Love your blog! Its really sweet - you
write so good, and Ive found loads of
stuff I didnt know before.
Come thru my blog sometime n follow if u like what u'l c or read

Thank you so much, I opened this blog from few weeks and I'm so glad it's entertaining and interesting for you and the others friends!!! I'm trying to represent myself and show my best purchases, to give advices and to get some! See you soon, XOXOXO I'm following you, follow me back, if you want!

this is a really great post and your blog is awesome! I'm following you now! :)

Thank you so much for ur comment. I liked it :)

By the way, the last 2 pics are amazing!

Beautiful things! I just learned about Miyake on the show Fashion Hunters, I had never heard of him before. Now I've seen twice about him in a short time, I guess I am a fan!

issey miyake is an amazing designer and artist, he never seizes impressing me with his designs
lure of the dark side
blog