Those who know my blog and its contents prior to this post may think that it has taken a decidedly taken a turn for the 'sweet' so to speak. This was not completely consciously done and I can assure readers that I have plenty of fashion grit and dirt ready to dish up. Consequently, my new design (fresh look, fresh start - by the way, if you have trouble reading the font with the background, be sure to tell me and I'll do something about it) choice clashes with my desire to comment on the latest Agatha Ruiz de la Prada collection and perhaps briefly introduce this Spanish designer to those who know but little of her.

Noting my recent disappearance from the blogging world, and not able to say that it was purely down to procrastination and schoolwork and a passing disillusionment, I will blame that which is still on my list of suitable alibis - the weather. Like Mary Poppins before me, I base a lot of my comings and goings upon the wind changing. I am very much the sort one might find attached to a long piece of string going up into the clouds, instead of one's kite, though on the other hand, you would not catch me bursting out of fireworks (Loud and dangerous things at close proximity) What I mean to say is that, I told myself I'd start blogging again when the wind changes... well, when the winter snow finally melts away until next year, which is more than a little bit determined by the wind since all the snow we have had was coming from a strong wind from Russia. Usually, this would ensure me a sabbatical of maybe a couple of weeks at best but the snow went on and on going from a joy and a treat to an absolute nightmare. End of March and I never wanted to see snow again. Whatever people might say about our weather, in Britain, it is generally mild and, until recently, it hardly ever snowed. Now, all I want is the sun. I have so many lovely clothes for warmer weather and grey skies are starting to depress me. 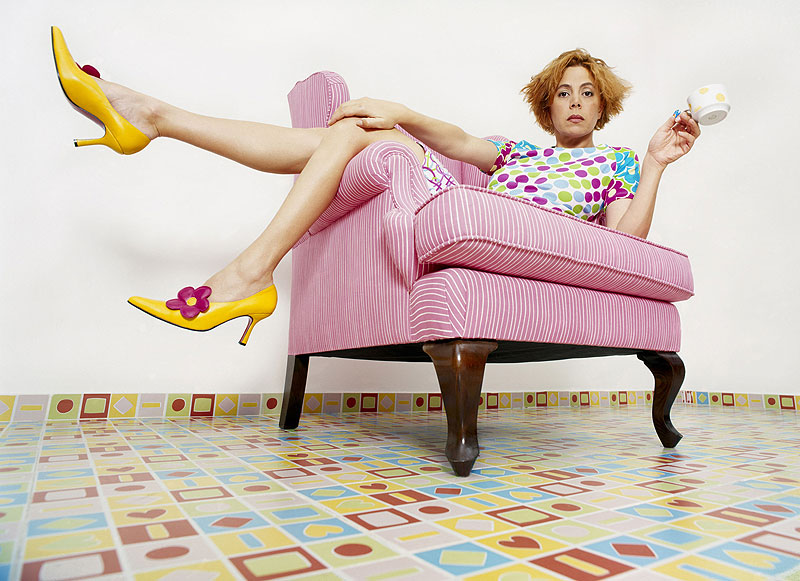 Agatha Ruiz de la Prada, 12th Marquise of Castelldosrius, is well-known in Spain but less so elsewhere in the world. She presented her first women's collection in Madrid in 1981, simultaneous with and promoting La Movida Madrileña, a Spanish counter-cultural movement which emerged after the death of Franco (see footnote for further details)

This collection is more than a little typical of Agatha Ruiz de la Prada (I think, from now on, it shall be referred to ARDLP - we have reached the point where I would believe it impossible that you did not know what I was going on about) Prime example of la Movida Espanol, ARDLP is a beam of sunshine in international design. Eccentric, confident and innovative, the designer deploys all her originality into brightly coloured confections, non-conforming to traditional aspects of clothing.
Her recurring motifs include crescent moons, suns, stars and, of course, hearts. Her collections are testament to the dynamic and seemingly optimistic world which she presents to her public. With her originality, style and involvement in every element of design, she is one of the great personalities of La Movida espagnole. The designer who defines herself as being of an "independent, creative and idealistic" character, evolves apparently obliviously to the diktats of international fashion. Nothing stops her, she paints a vividly coloured world into every field of creative design!

If it is not already apparent, then I shall explain my reasoning for calling this 'The Bubblegum Clan'. Although there are clothes of more sobre colours like navy and burgundy, there is overall a great use of pretty pastels (so maybe she isn't completely oblivious to the rest of the fashion world) and the lovely masks on the models faces reminded me of animated children's films I used to watch where the bubblegum would pop in somebody's face, covering them in a thin sheet of pink rubber stuff. Yes, the artistry here is clearly greater, and less spontaneous, but one cannot deny that it bears a strong likeness to those images.

I really cannot help really lusting after the big burgundy coat. Not really the style I generally go for... but it's so big and burgundy and plush-y and it looks so comfortable and warm! (And I thought comfort would never be high on my list of requirements)

Thank you for reading. This is more something to ease me back into posting, but there should be a few personal style posts and cutting wit and fashion analysis coming up.
(I may also, in passing, introduce you to one of my new procrastination obsessions.)
Do comment and Please Follow!
I may do a few more tit-bits of Agatha Ruiz de la Prada collections in the future, so if you want to see more outfits of this type, stayed tuned.


Footnote: La Movida Madrileña is personified by well-known figures in music, film, design, graphics and cartoon, but it is also felt in other aspects of culture as well as social mores. It represented the emergence of the post-Franco Spanish identity and the resurgence of the economy, from 1975 onwards but most noticeably in the 1980s. Although begotten in the Spanish capital, it emerged likewise in Barcelona and most other Spanish cities. It was characterised by an appearance of hedonism, freedom of expression, defiance of taboos which had been forcibly imposed by the Franco Regime, use of recreational drugs and a new spirit of freedom in the streets. The director, Almodovar is considered one of the figureheads of the movement.