Salutations! Forgive my temporary absence in the face of a dreadful cold and variety of other things. So, having spent a day obsessively listening to The Ditty Bops and Doris Day, watching Anime, probably being the last person I know to find out about Whitney Houston's death, and drinking Pepsi Max like the addict I am, I am quite tired. More commercially, I have also been keeping an eye on all the updates from New York Fashion Week and watching the BAFTAs, where The Artist rightly won Best Actor, Director, Screenplay and Film. Moi = Satisfied. 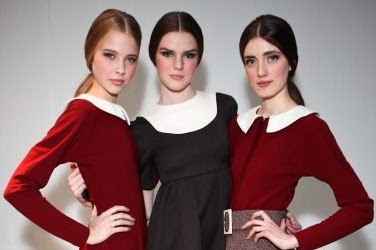 So... what from New York Fashion Week? Well, although I intended to analyse something else first, I have come to Giulietta's Autumn/Winter 2012 Collection... which was far better than the Spring 2012 one, in my opinion at least. 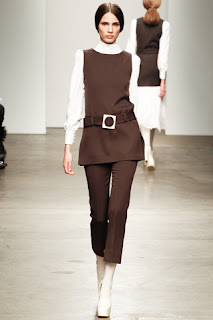 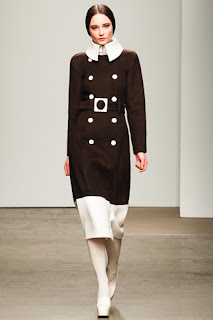 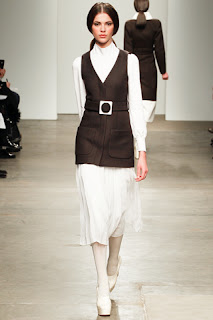 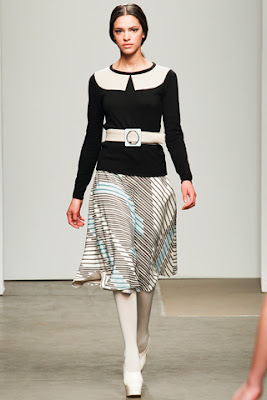 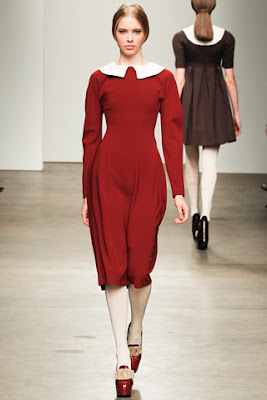 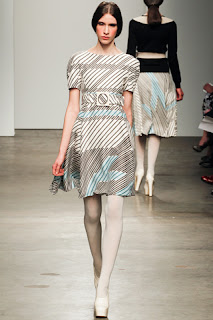 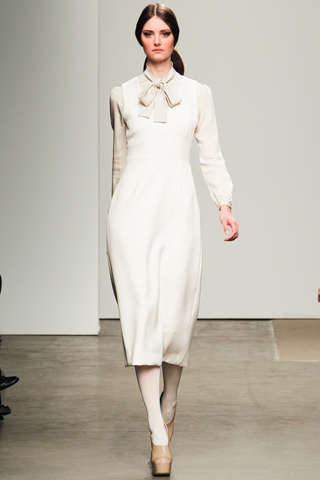 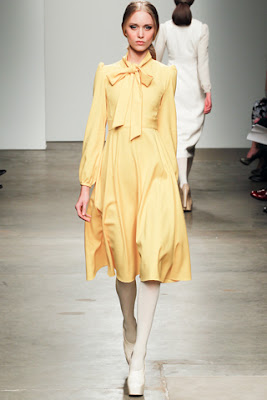 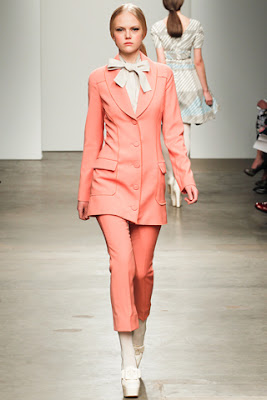 Of course, there was rather a lot of brown (not necessarily a bad thing in most circumstances) but I was sold on the pussybow blouses and dresses. Puffy, whimsical or lady-like blouses have always been a clothing win for me. I do not have enough of them. I need Poet Shirts, and Pirate Blouses... Pussybow blouses are (in many ways) simply a toned down version. The Official 'I-want-it-so-badly-it-hurts-that-I-can't-afford-it' of this collection, was this beautiful yellow dress with gorgeous sleeves and pussybow. *Sigh* I think I am going to try the sweet, ingenue look again. If I could only find a dress somewhat like the white one to the left, and some beige/black ballet pumps with strap... then I could tie my hair back in a half-ponytail with a white ribbon and have a go at the wide-eyed innocence. I can act as candid and wholesome as Mary Pickford - though she was a good 10cm less than me and often played children. I shall re-evaluate. I can act as candid and wholesome as a less-blonde version of Doris Day. Until I get angry, of course. On that note, when it has all been arranged, I will make sure you are the first to know. Cross my heart and hope to die. I read with interest the suggestion that Visconti's 1963 Italian film “Il Gattopardo” (which I know under the name 'Le Guepard' and, for the english-speaking, the Leopard) set the tone for Sofia Sizzi’s Autumn Giulietta outing. It started with a brown cashmere vest worn over a white collared blouse and pleated skirt - it felt a bit ecclesiastical yet was still wearable - culminating with the fancy ball gowns, such as a citrus green below-the-knee dress with crystal beads. I suppose I see where the suggestion comes from, and it gave me a wonderful excuse to pop the DVD into the player at two o'clock in the morning, just to evaluate how true. Any reason to be watching Alain Delon circa 1963 is appreciated... oh, and Claudia Cardinale in beautiful dresses.  Otherwise, what else can I say about the collection? Waists on every outfit, which is always nice to see. Great collars and some fantastic monochrome patterns as well as a few floaty skirts (Yes!) almost none of which were too short. Some lovely shoes, mostly in neutral tones, with a couple of light blue metallic colours, some shiny red and orange. Very simple hair. Low Ponytail (which I honestly prefer to the high one on most people's faces)  and white tights. Indeed, if I have picked up anything, then it is the belief that investing in a nice pair of white tights would be a valid style decision. 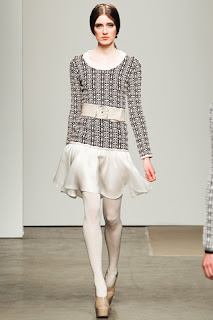 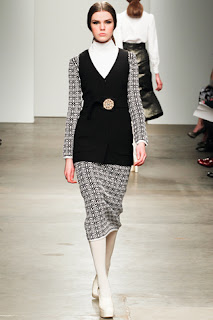 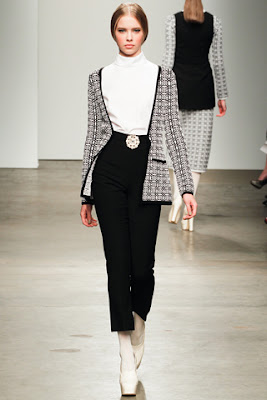 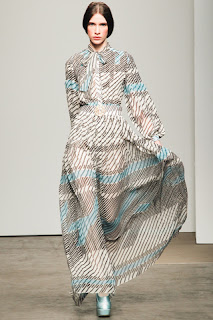 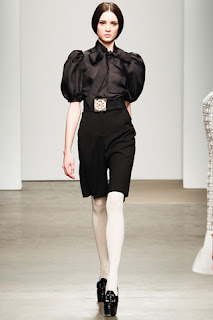 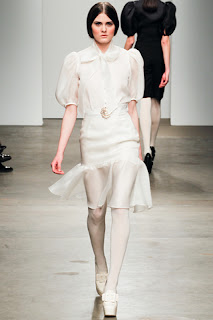 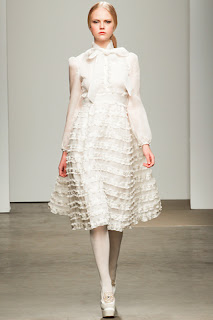 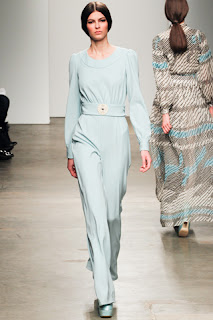 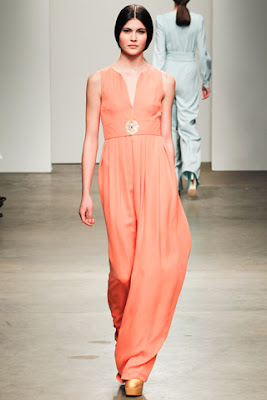 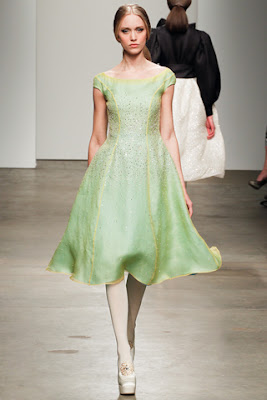 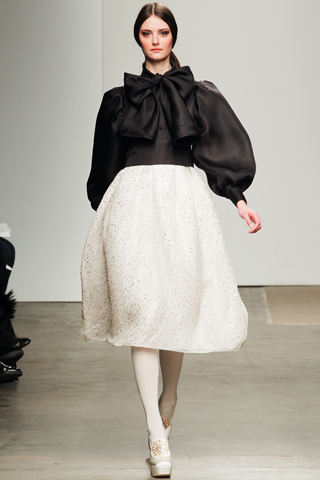 Suffering from immense fatique and the beginnings of a migraine, so all I have left to do is to say 'over and out', ask you to comment and encourage you to follow.

On a last note, just look at this blouse on the left! *Flails hands wildly* Gorgeously, luxuriously wonderful sleeves. I am going to have a huge amount of trouble finding a charity shop or high street equivalent. Wish me luck.
Posted by Zoé at 18:14

Email ThisBlogThis!Share to TwitterShare to FacebookShare to Pinterest
Labels: Giulietta

Lovely post , this collection is perfect !
Thank you for your sweet comment and for passing by - i am now following you !! hope i'll be hearing from you soon !! xo

Very cool blog hun! Xx I really like the way you've described this collection!!! And your the first thing I found to describe this collection! I checked Style.com and they havnt put anything up!!!! :D

I certainly can appreciate the history behind the collection, but I cannot say that I would wear any of this. It's so not my rocker style!

i am highly dissapointed by this collection, seems too demure for me, i seriously cannot identify myself with any of this pieces.
too bad.
marianne
http://lureofthedarkside.blogspot.com/2012/02/i-bet-you-never-imagined-this-happening.html
check out my brand new crazyyyyy post. i went a bit crazy there.

its all so lovely :) great post!
xo,
tiana of l'esthetique

Thanks a lot for your comment!!! Cool Blog!!! I start following you, hope you'll do the same!!! xoxo

I love the colours.
xoxo