Greetings, and welcome to my exploration of Dance in the world of fashion - using two beautiful Vogue editorials, and a few extra tidbits.
It feels like a while since I posted - but the irregularity is only going to get worse. Sunday, you shall have another!

Anywho, does anyone who reads Vogue (the british one) remember this editorial from August 2011? I remember it as one I actually really liked... not only because of the beautiful clothes, but because of what I considered to be a great concept. Arizona Muse modelled every outfit - coincidentally, she is on the cover of February 2012 Vogue, and looked more than usually gorgeous in certain costumes. 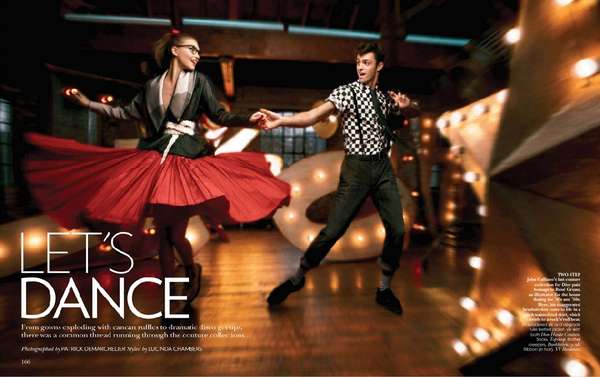 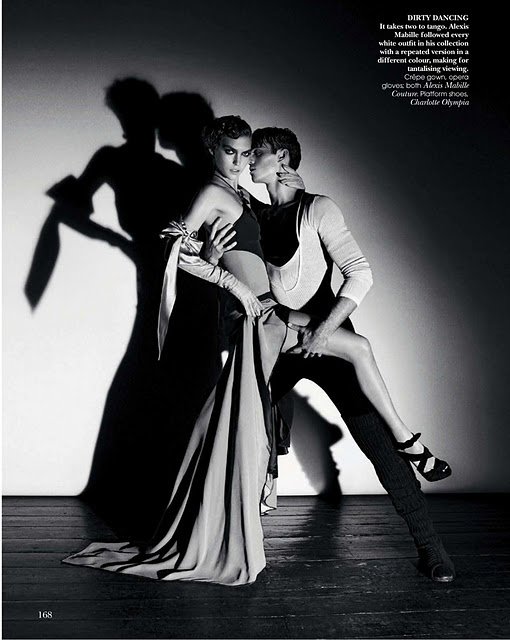 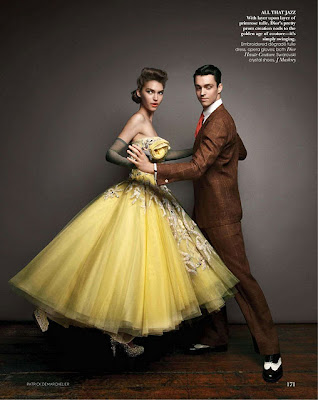 Maybe what I loved the most about this editorial, and why I flicked to look through it a number of times, was the wonderful variety alongside the beautiful assemblement of everything as a whole. From couples dancing Fun Jives, elegant Foxtrots and sizzling tangoes... to 70s-style Divas. Not, of course forgetting, Arizona Muse in a beautiful ballet-inspired costume while real-life ballerinas on either side of her strike impressive poses. 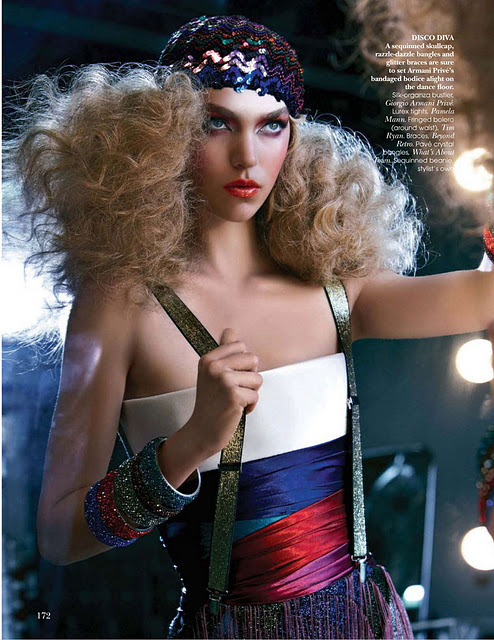 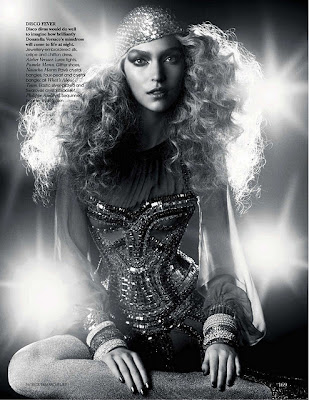 Also not forgetting, bien sur, Jean Paul Gaultier's fantastic semi-can can, semi-burlesque (which in terms of outfits, is hard for people like me - who honestly don't really see much can can or burlesque - to judge which of the two it is. I would lean towards something more burlesque) 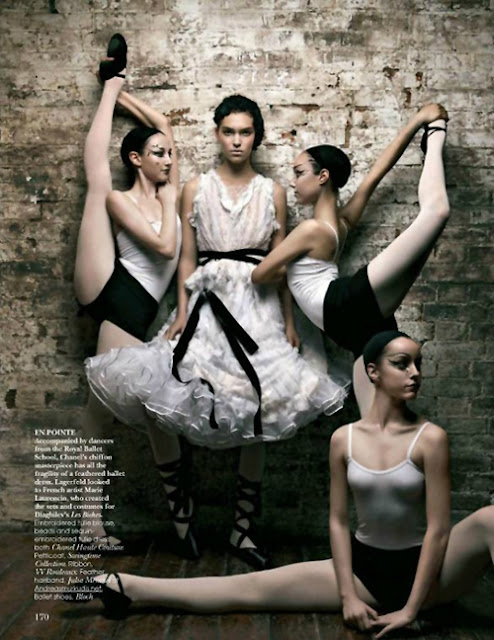 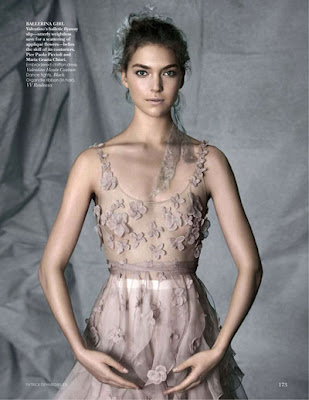 Of course, I would state that Fashion has always greatly influenced the ballet - and vice versa. In 1924, Coco Chanel designed the costumes for 'Le Train Bleu' (probably a ballet less known in popular culture, but inspired by Agatha Christie's 'The Mystery of the Blue Train', with a story by the brilliant Jean Cocteau and a curtain painted by the legendary artist Pablo Picasso which, on top of the Coco Chanel having designed the costumes issue,  would make this Ballet something I would kill to have seen the original of... and I am certain I am not the only one.) 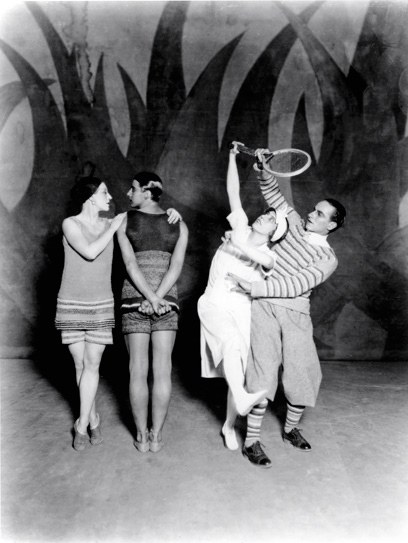 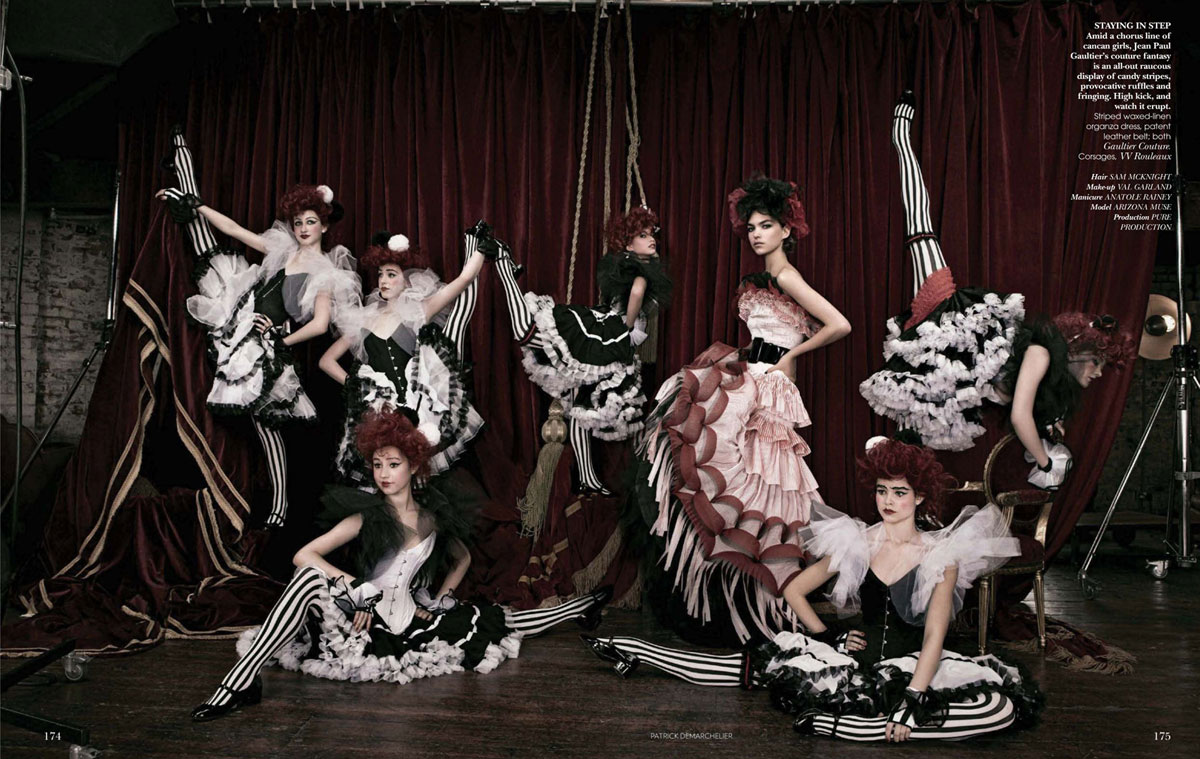 Anyway, so if this editorial showed a delightful fantasy of dance and ballet, the following one was quite different. Although it had the same title, it was a lot more bitingly realistic, in both clothing and with drastic photography.

See what you think - Sasha Pivovarova transformed into a dancer, for Vogue Paris , December 2011. 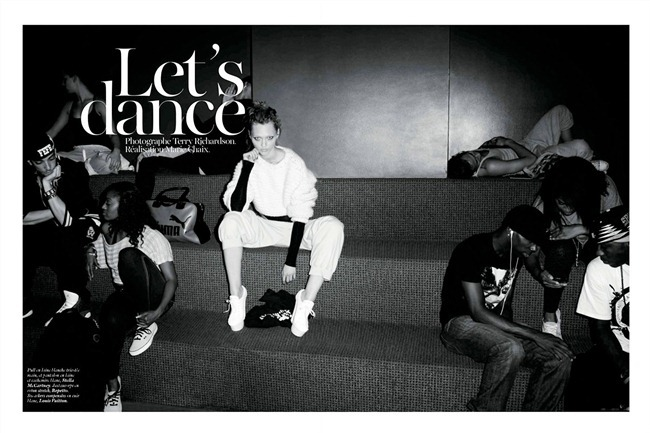 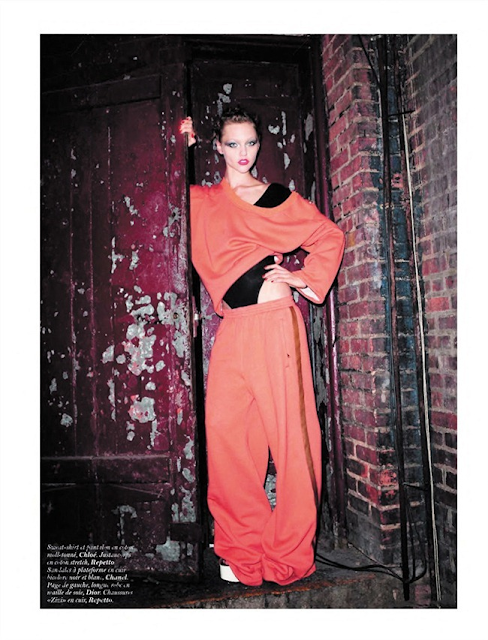 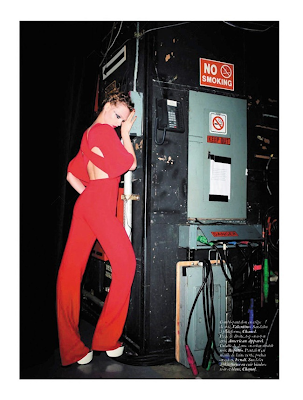 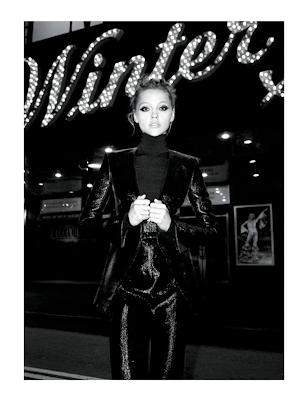 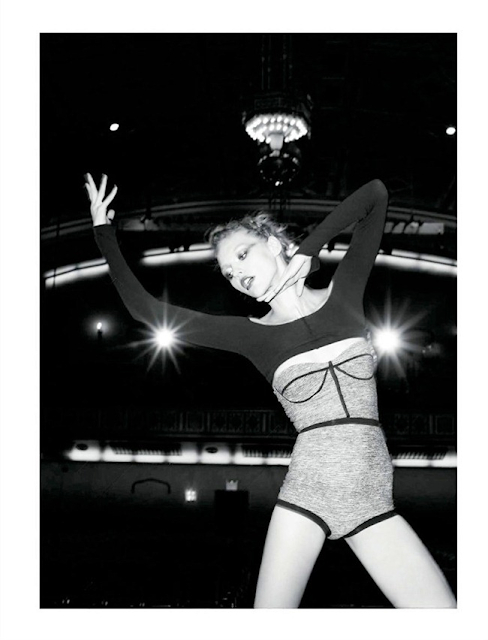 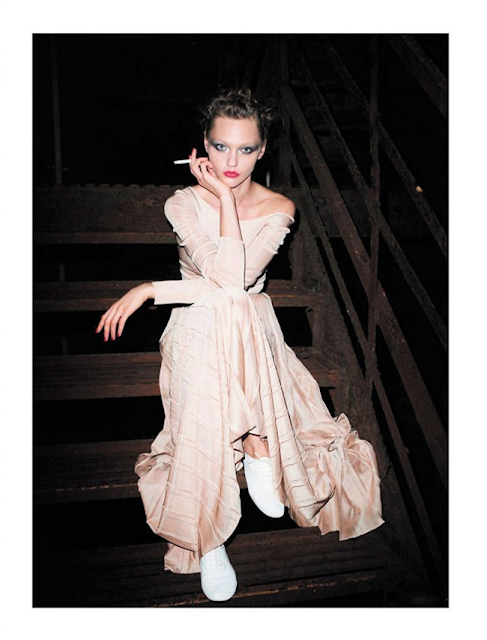 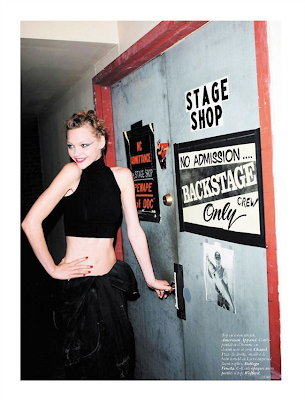 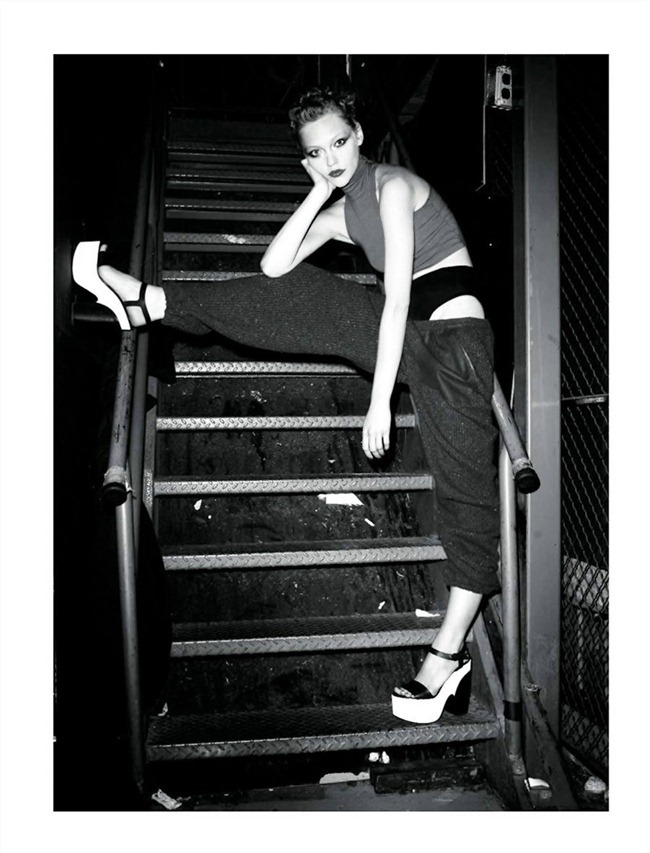 So, which do you prefer? To a certain extent, a Biting Realism or a more lyrical fantasy I think the two sets of photos show two different sides to the same world of dance and of music. Backstage vs. the glittering lights. The costumes, the glamour and the elegance vs. the hard work, training and physical strain?

I would write more, but am severely exhausted. I will simply serenade you out with a little David Bowie. Not because it has anything terribly to do with either of the editorials, but because I love Bowie's music and the title is the same Let's Dance!

Hello!
I love the 1st one, especially the 2nd image with that skirt!
Today is Sugar Lane first anniversary and I would like to thank you all with a especial post! Drop by and leave a comment ;)
Kisses from Spain,
S

omg these photos are so amazing! I have no words for it! :)
http://thesmallnoble.blogspot.com/

goodness, love! my fav pic is the nude-like one but maybe because i had a set of nude ballett clothes on my own :-P no matter how dancing looks like i think it is most important that you can see and feel the passion.

I think Coco Rocha did an amazing dance editorial last year, for Elle maybe? You should check it out! xx

I was about to say that combining fashion and dance is a certain winner, but I don't believe we would have all this incredible fashion without dance, or breathtakingly beautiful dance without fashion. They've almost always influenced one another. xx

Gorgeous post Honey!!! Honestly can not wait for the next one. Your write fashion with humour, style and wit, and anyone who says differently is an Idiot!!! :)

Great post as always. Very interesting.
These photos are so lovely. Love your selection.

Thank you so much for the super kind (and funny, at first I was scared you didn't like the blanket dress) comment! This piece, article(?) you wrote is very interesting... I like the photos in the first set more but the second set are more emotion evoking. Anyways your blog is pretty cool! I love your articles about fashion, they arr good to read.
Charlotte