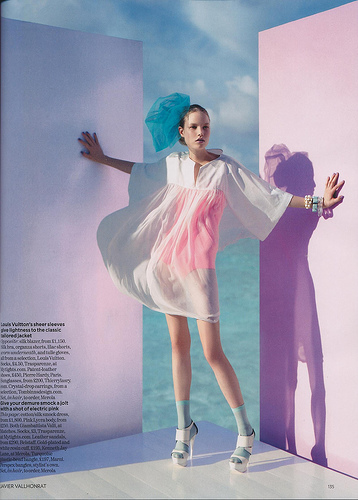 Salutations! So... today I was intending to do a piece on items of my wardrobe, but I had miscalculated our gloomy english weater (and my eventual lack of common sense) forgetting that on the eighth of december, by half past four, the light will probably not be good enough to take any worthwhile photos. In fact, barely an hour later, and the light is not good enough to see my hand in front of my face if I am standing outside and away from the glare coming from the windows of the house.
In conclusion, I shall reserve that post for Saturday and, instead, give you an aesthetic delight. Breath-taking photographs taken by Javier Vallhonrat. Although I do admit, I initially wished to have a balanced range from his photographic portfolio, I have ended up with a larger percentage of photoshoots from the noughties than from any other time.
Anyway, I hope you enjoy... and do comment - I greatly appreciate all comments. Even if they are negative. 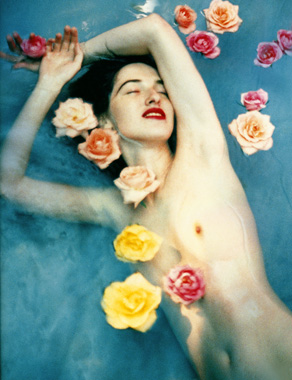 Javier Vallhonrat in a Spanish Photographer, born in Madrid in 1953. He studied Painting at the Fine Arts Faculty of the University of Madrid in the early 70’s. Just after receiving a degree in Fine Arts at the University of Madrid, he reached international recognition while contributing his photos to several fashion designers. In 1992 he broadened his interest in photography and began creating advertising films, while on the side teaching photography at the Cuenca School of Fine Arts. 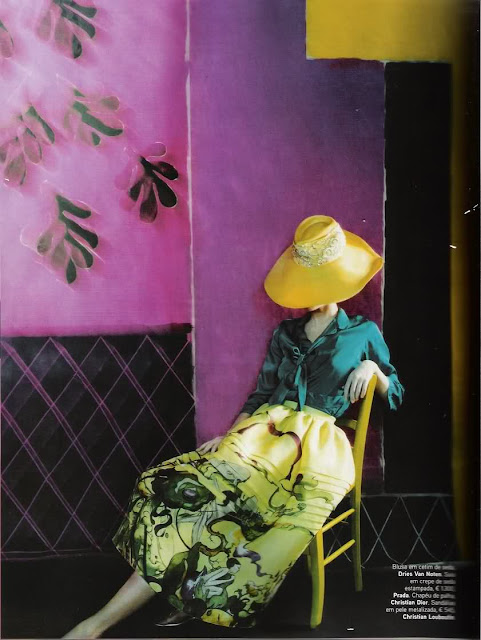 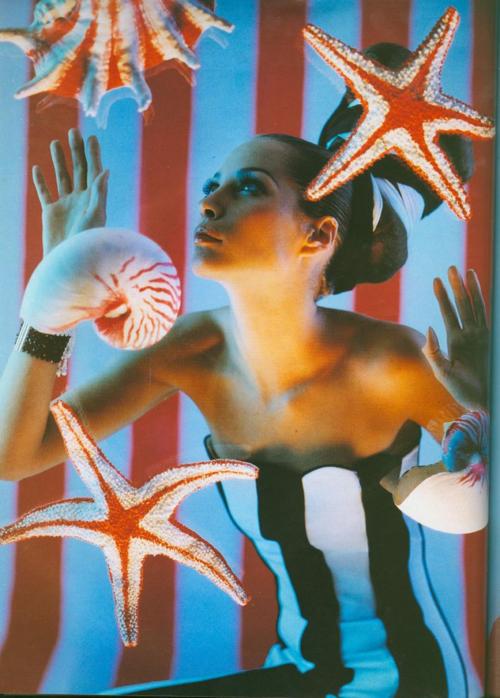 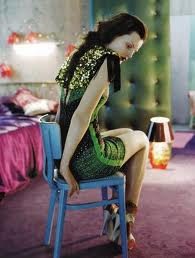 His use of colour and light is perhaps the most striking thing, and easily recognisable as his range of work. He captures sensuality in a rare and exquisite way, and uses the environment the model is in 'd'une merveilleuse facon', creating a timeless look. He clearly has a great eye for composition, and balance of colours, especially in (what I would class as) pastel colours and warm berry colours. Personally, I love most of his photos. I love his palette, and I think there is a real elegance to his photos. It is much to be admired. 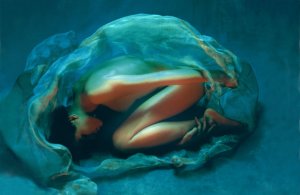 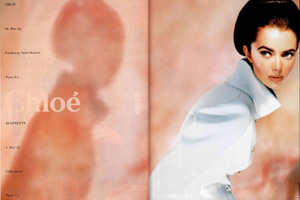 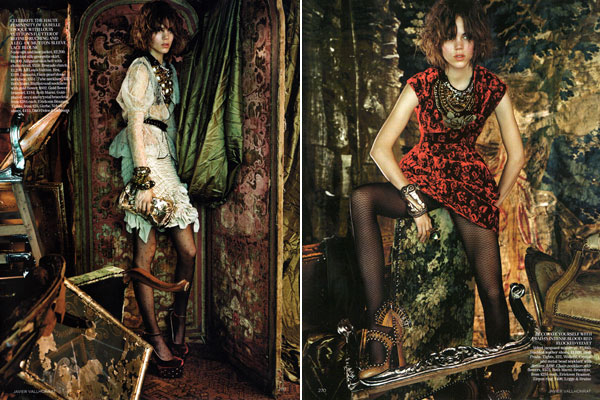 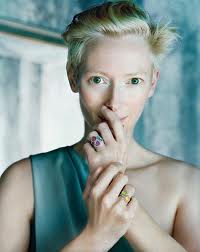 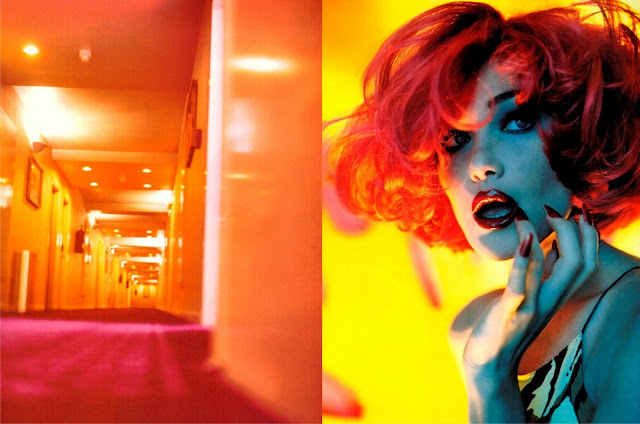 So GORGEOUS! I feel like I could touch his paintings, the colors and the fluid movement in them are unreal...and how awesome he can take his early work and evolve in the 21st century in print ads and commercials! Thank you so much for sharing this...

AMAZING BLOG! I am a constant reader, but unfortunately, can't really follow. On the other hand, you are on my faves!

Thanks for your comment, it is very valuable to my. Your blog is beautiful

Thank you for such a kind comment! I really appreciate it!
I love your blog too, it's different than most of other blogs and I find it refreshing.
Hope you'll follow me back!

Hi darlin, thank you so much for your beautiful, heartwarming comment. It meant so much to me. You have an inspiring blog. I love the use of soft colours in these photos, creates a hazy effect.

I am really in love with Javier's work, I think his one of the best Spanish photographers ever!

Aww Zoe your comment is so sweet! Thank you so much!
I sometimes think that my English is not good enough to translate my posts but some comments like yours make me feel happy and keep with it!

By the way, great post, it is very complete and you have a nice blog too :)

Hello!
I did not know your blog!! I have come to him from your comment in mine and I like it!! You have a few very nice photos:)

My blog is in Spanish, but because of it I have put the translator. It does to me a lot of illusion that you read out of Spain!! If you want we can follow.

I sit the mistakes that will exist in my comment but my level in english is not the one that I would like:) and yes that I have understood your comment:)

the photos are really inspiring! I really like your blog, so I'm a new follower =)

I love your colorful and informative posts. Not your average blog!

Tomorrow we begin a Christmas giveaway on our blog.
www.tuestiloadiario.blogspot.com

Zoe, thank you very much for your sweet comment on my blog! i don't speek english very vell, but i try ! ;.)
i like so much your blog! and i follow you now! i hope you come back to mine for the new posts !
kisses! have a nice day
Miriamstella

Thanks for your comment. I really appreciate it!
I only writte in spanish, but I am thinking to writte in english too.
thanks for visting my blog adn keep visiting it!

Hi Zoe,
your blog is really, really great.
I want to thank you sooo much for all the nice things you wrote in a comment on my blog! And you asked if the pictures on my blog were all taken in Croatia... My answer is yes. I live in Zagreb, the capital, and almost all the pics were taken here. Thanks for your beautiful comments about my country too:)
I'm following you now, hope you'll stop by again soon:)
xoxo Sienna
http://fashion-sienna.blogspot.com/

Great post!
Today we begin a CHRISTMAS GIVEAWAY on our blog.
www.tuestiloadiario.blogspot.com
xoxo

He is so talented, i really love these photos. It's very inspiring.
It's so creative and artistic.
Great post as usual.

Such a beautiful post Zoe :)
And thank you soo much for lovely comment on my blog, you are so nice :)
Kisses :*

I want to learn English. Please help me!

Wishing you and your fabulous blog all the best for the new year!!!!
Best Regards
Miss Margaret Cruzemark
http://margaretcruzemark.blogspot.com/

Thank you for sharing those amazing editorials with us, i wasn't familiar with the particular photographer but now i am mesmerized by his photos. i shall check his work out through the web.
thank you
lure of the dark side
blogspot
com