Hello! Just a break away from my exploration of different Japanese Designers with my 'Slightly Gothic Victoriana-inspired Retrospective' - Sincerely. what else was I going to call it? Though in many cases 'Victoriana' would be the wrong word to use, and I should have probably dropped it in favour of neo-victorian.
Anywho, I have had an alright, if a little tiring day. Looking forward to a German Speaking Exam (if you had not noticed, there was a sarcastic ring to that) and trying to remember where I left the very detailed scene-by-scene plan for the play I am writing. *Sigh*


So, moving swiftly back to the subject at hand, my neo-victorian outfits. Alright, so the first one looks more like a costume, but the other three are what I would call Victorian Inspired day-to-day clothing. Sort of. I would wear the third one to an evening somewhere, but probably not to Town. If one dresses up all the time, then one will feel less special when dressing for special occasions. 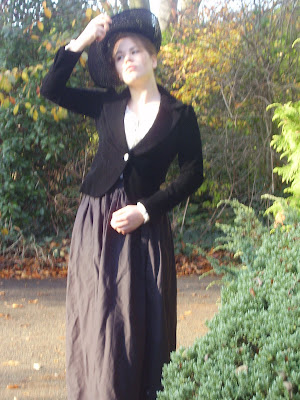 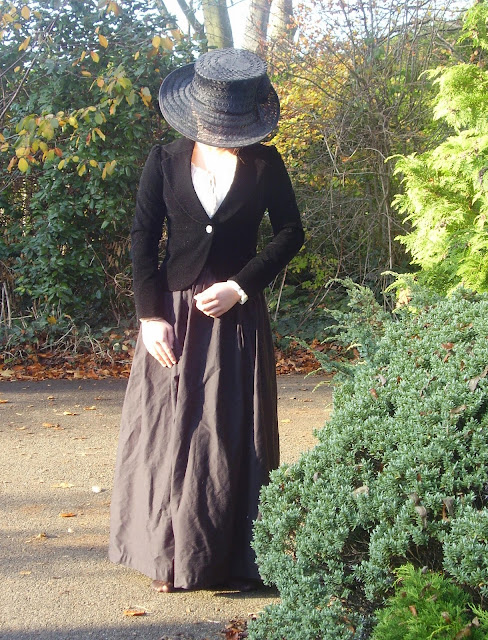 So what is this outfit? Well, a black straw hat from Peter Bettley, an essential if one is really going for a Victorian Look. A Lady would never leave the House without a hat. Which is funny, because I have done just that in the next two upcoming outfits, but as I have already said, they are more 'inspired by' than attempting to be truly historically accurate. The Jacket I am wearing in the photo was a birthday present from my friend, Jemma. At first I was worried it was not going to fit me, but thank heavens, if worn with quite a light layer underneath, it does. This light layer was a 'Phase Eight' poet blouse in ivory with a drawstring collar. The skirt is a simple black practise skirt, and can be worn with almost everything. 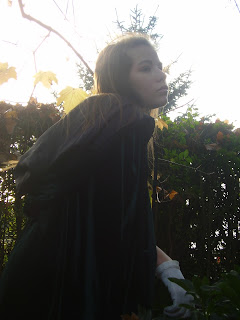 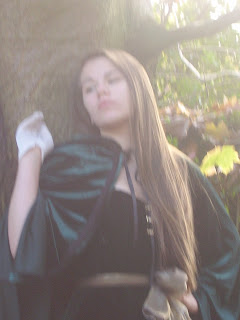 This Second of my Four Outfits is completely different. More whimsical, with a cloak and no hat, could possibly be considered as even having Medieval vibes. 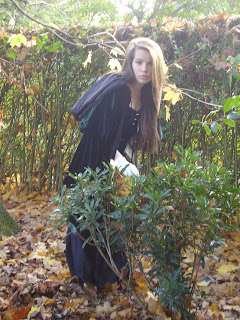 I am wearing an emerald green cloak from 'Void' an alternative clothing shop in Nottingham. Not that I would go in there without my friend, Jemma. Alone, it would make me feel slightly uncomfortable... and stand out in the wrong way. Not sure where the white glove came from and I was only able to find one. The Dress is also emerald green, vintage and adopted from my Grandmother, with gold bow buttons. Lastly, the same skirt as in the first outfit, and a gold scarf around my waist. 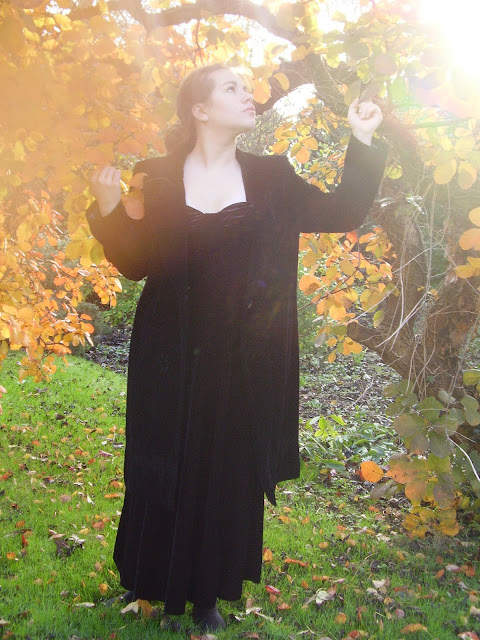 This third outfit was an entirely velvet concotion: full-length black gown adopted from my Mother (previously seen in my red&black piece) and the new coat of which I had spoken in my last post. The detail on the sleeve of it is absolutely gorgeous, though you can unfortunately not see it in these pictures.

I am less sure of what my aim was with this one. It really is a sumptuous combo, managing to be surprisingly warm, and stylish at the same time.
Yes, I am all in black and, in some of these photos, it does make my skin look rather pale (which it is. I tend to avoid tans as far away from the Summer as the end of Autumn is) 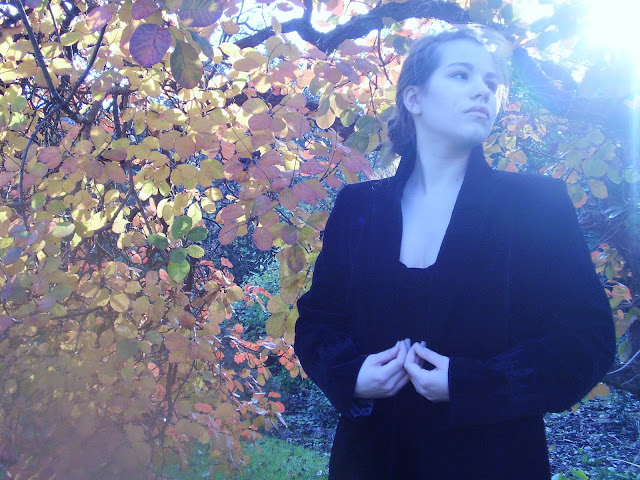 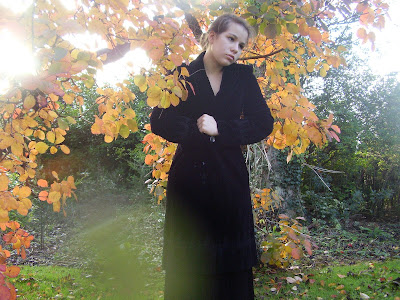 Actually, although I did not believe it would be so beforehand, this may have been my favourite of these outfits. I also thought that the burnt orange of the tree's leaves with the dew-covered green of the glass and the completely white and empty skyline, worked well with the impression I was trying to give. 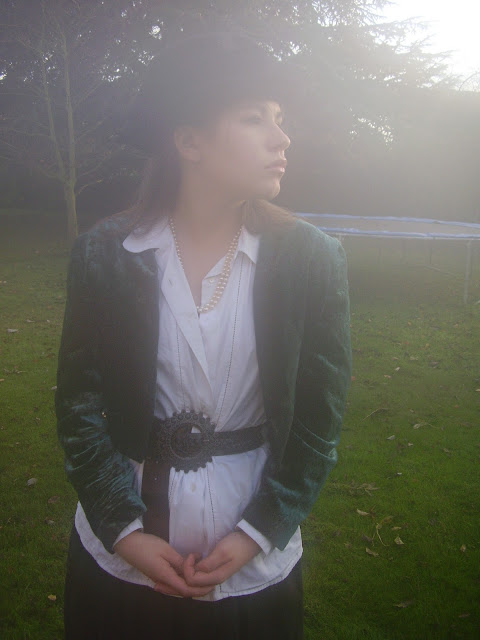 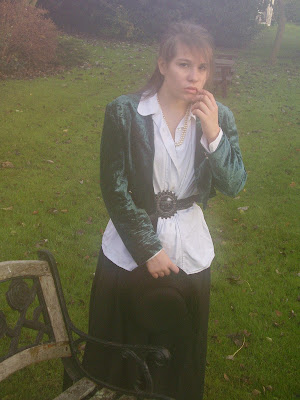 This outfit has been described by a friend of mine as 'a cross between a Charles Dicken Character and something from a fairytale' and by another as, simply, 'Pirate-like' though I hardly see the latter. It has a few steampunk vibes too.

It is made up of a green jacket (intended to be worn with the green dress of two photos ago) a Laura Ashley white blouse, the same black practise skirt, a belt, a string of pearls and a Kangol Hat. 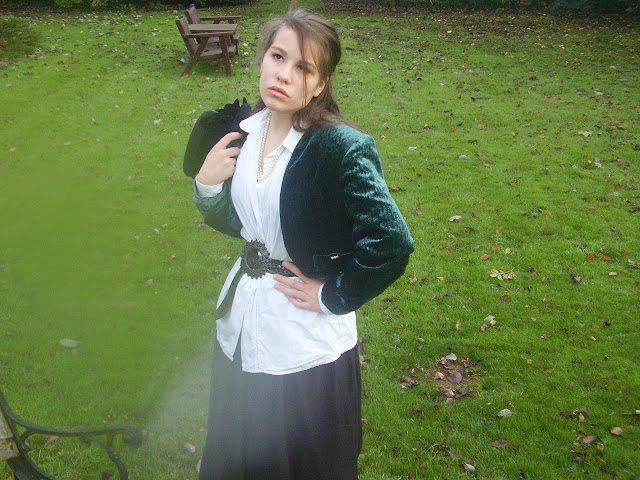 Thank you for reading. Comment. Which was your favourite outfit? Remember to check back soon.

kisses from your new follower

Wow you did a great job with these pictures, really cool outfit, you look great, I love your skirt, what great details and that jacket is so nice, the perfect touch to the outfit, your hat also rock! Your have an awesome blog by the way and I am a new follower! Hope you will like my blog and follow back!

Love the post and the pictures. Following your blog
Smashinbeauty Makeup Blog

These outfits would be great to wear at an event we have here in San Francisco called "Dickens Fair" http://www.dickensfair.com/, I feel like you would very much enjoy it!

Hello Zoe. Thank you so much for visiting and for your lovely comment. Your blog is fantastic. Let's stay in touch!!!
Best Regards
Miss Margaret Cruzemark
http://margaretcruzemark.blogspot.com/

lovely blog!!! :) this look of you is really retro and chic. love.

These outfits are so pretty and stylish.
That hat is fabulous.
Lovely photos.

Really Pretty. You Look Stunning Like A Model Especially In The Second Photo. Oh, And I Like Your Hair. It Is Exactly How I Want My Hair To Be. Mega Jealousy. xoxox

Thank you so, so much for your sweet comment! It really made my day :) All of your outfits are beautiful, the third one is my favorite. Very simple and I love how you pop out of the fall foliage!

im following on google connection. Hope you do the same :)
MY BLOG: Dress Up For Armageddon

Lovely post. I have always been fascinated with Victorian era, especially the fashion. Keep up the great work <333

Very good outfits! I was not used to wear hats, but I have bought two recently, I think that they look very elegant in a vintage/victorian look!

I love the velvet, it's gorgeous xx