Salutations to my not-so-numerous number of fans! Yes, I have not posted in fifteen days. *Small smile* but 'en revanche' I have a few little numbers ready for your enjoyment, written by yours truly. Who else? In a few days (or weeks, depending on the time available) I hope to do a little piece on eyeliner, and everything that may or may not entail. However, that which I wish to do now is a piece called Japanese Fashion, Pt.1 Oh, and in a few days, I shall also do a Fashion Piece on each of the ten countries where I have the most views... and this can honestly change at any moment... as well as putting together an outfit, again based on these countries. So, who are in the Top ten so far? The three who are pretty firmly at the top are the UK, France and the USA with, fighting for the other seven places, Spain, Poland, Russia, Canada, New Zealand and, in the danger zone, Egypt and Italy. Oh, and as I am writing this, I have just had my first noticeable views from Bulgaria... which will hopefully not get too high. I would have no idea what to come up with as an outfit - though I would 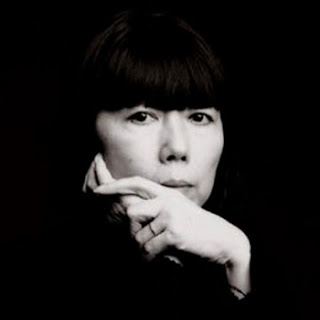 Anywho, here we go again. I will kick-start my exploration of Japanese Fashion with, a personal favourite, Rei Kawakubo for 'Comme des Garcons'

And, just for all of you who are sitting there thinking 'Who on Earth is she?' (you probably should not be reading this sort of blog) I shall give you some basic background info. 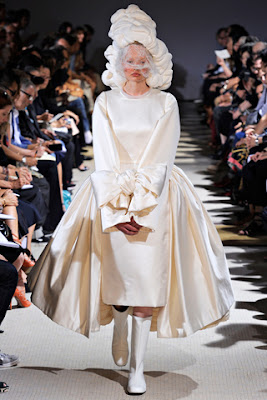 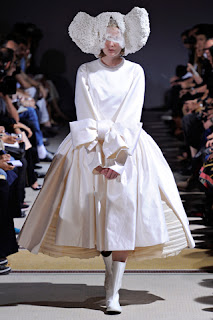 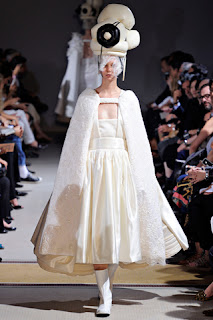 Now, I do not wish to stereotype, but Rei, like many other Japanese Fashion Designers, does have a liking for the monochrome... and unwearable pieces.

Comme des Garçons specialises in anti-fashion, austere, sometimes deconstructed garments. During the 1980s, her garments were primarily in black, dark grey or white. The materials were often draped around the body and featured frayed, unfinished edges along with holes and a general asymmetrical shape. Challenging the established notions of beauty she created an uproar at her debut Paris fashion show where journalists labeled her clothes 'Hiroshima chic' amongst other things. Since the late 1980s her colour palette has grown somewhat. 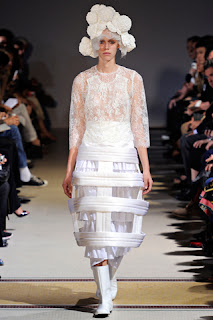 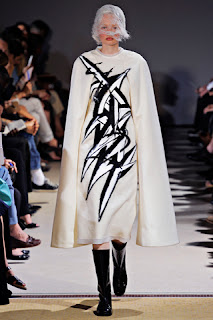 So, although interesting, this Spring/Summer 2012 collection was not exactly far off expectations when it was presented on the 1st October 2011 during Paris Fashion Week.

It was a collection influenced by different stages of life: Birth, Marriage, Death and Transcendence. This is apparent through the use of Duchesse Satin, a typical choice for a wedding dress, to represent the Marriage Stage, and even the densest of observers could not have failed to observe the wedding dress-like shapes and forms. There were also more oblique, so to speak, references. Not everybody would have picked up straight away on the pointy-headed robes like those worn by church dignitaries during Seville's Semana Santa, or the white flowers, as in 'a body laid out in white flowers'

Were there hints of the 60s? In line with the current Fashion. If you do not think so, then pray take a glance at the white boots.

Finally, was there a little of the Cristobal Balenciaga in all this. Not particularly in terms of clothes. Although there may be a similarity in silhouette with some of his designs, I do not think Cristobal was really this avant-garde. ;) No, I reference Cristobal Balenciaga, a deeply religious man who elevated the craft of couture to the level of spiritual quest. He believed he could find salvation in the perfect sleeve. It was probably coincidence that sleeves were the signal detail of the Comme collection (they were long and wide, falling almost to the floor)
﻿

﻿ Ok, so now I have briefed you quickly on the ins and outs of this latest collection, I shall turn matters to past collections, photo shoots and looks, letting these fabulous photos do the talking (well, with a little comment for each but, knowing it's me, it is not going ti get much better than that)
Thank you for reading. Tell your Friends. Spread the word.
﻿﻿ 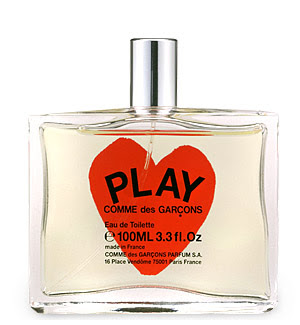 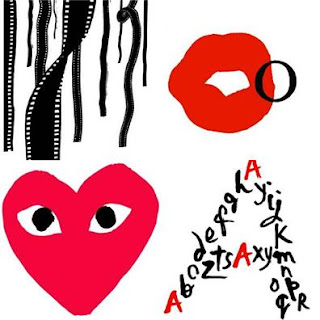 ﻿   So... remember to check back regularly. I promise to try to post more often >> and things should get better from January onwards. Since, next year, I will be trying to aim for one hundred posts throughout the year.
Oh, and comment. I answer every comment I receive, even the negative ones, and am happy with anything.

Hey! I love RK too! Greetings from Australia!

@Demi >>> Thank you for the comment. I really appreciate it... and the 'Greetings from Australia' made me smile.

Thanks for visit my blog so I get to know about you :)


There is a translate-button on top right menu on my blog, google-oversette. There you will find english/engelsk. Maybe I'll replace it wirh some flags later.

Good post! I usually don't like Comme des Garçons (it's not my style), but in this psot I found some really beautiful designs. Don't worry, it's ok if you write in english. I will follow your blog, it is very interesting ^^

thank you for your comment! your blog is so fascinating! I'm following you!

I loveee Japanese fashion! Not just because I'm part Japanese, but because every time I go to Japan I am fascinated by how they dress. Tokyo is just a city of amazing fashions!

So glad you stopped by my blog, let's follow each other!

thanks for checking you my blog!
I have really enjoyed reading through your posts! I love how detailed and descriptive they can be! Can't wait for future posts!

You have such a nice blog..I'm following you now, return love back please?
xxxxx

Awww thank you so much!, you made my day :) You are so sweet. I love your blog as well. Beautiful pictures. I'm following you. Will you follow me back?