Icon of the Month - Anna May Wong

I'm Anna May Wong. I come from old Hong Kong.
But now I'm a Hollywood star.

Few people have heard of Anna May Wong. Indeed, I only heard of her for the first time in 2005, on occasion of the hundredth anniversary of her birth, and did not follow up on this new knowledge for six years. I could have told you she was the first Chinese American Film Star but it was not until 2011, when I was researching Hollywood's anti-miscegenation laws as a follow up to my History GCSE classes on civil rights, that I genuinely took an interest. In relative terms, this woman was amazing and heavily under acknowledged.  Today is the fifty second anniversary of her death and, I thought, an ideal day to make her known to a few more people who might otherwise never have heard of her (also, this means I have more of a deadline so I will not keep putting this post off) She managed to have a substantial career during a deeply racist time when the taboo against miscegenation meant that Caucasian actresses were cast as "Oriental" women in leading roles.
At the time, she was known as one of the world's best-dressed woman (With the loveliest hands in cinema) 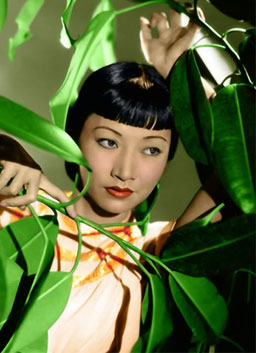 Anna May Wong was born on January 3rd 1905, just outside of Chinatown, in a community of Chinese, Irish, German, and Japanese. Anna May Wong's parents were second-generation Chinese-Americans, her grandfather from a village near Taishan, Guangdong Province. Anna May's father spent his youth traveling between the U.S. and China, where he married his first wife and fathered a son in 1890. He returned to the U.S. in the late 1890s, and in 1901, he married Anna May's mother. Anna May was the second child, born in 1905, and was followed by five more children.
In 1910, they moved to Figueroa Street where they were the only Chinese in the area, living among mostly Eastern Europeans and Mexicans, helping Wong adopt American culture. She attended a public school with her elder sister, but they then moved to a Chinese school when they became the target of racial taunts from fellow students.
At that same time, film production began to relocate from the east coast to the LA area. Movies were shot constantly around Wong's neighbourhood, and she took a strong interest, spending all her pocket money on going to the Cinema, sometimes to the detriment of her education, explaining why her father was not happy with her interest in films. Wong wished to pursue a film career anyhow and at the age of nine, constantly begged filmmakers to give her roles, earning herself the nickname of "Curious Chinese Child", and by the age of 11, Wong had come up with her stage name of Anna May Wong. This started paying off when, in 1919, she appeared as an extra in the Red Lantern and dropped out of school in 1921 to pursue her career full-time.

"I was so young when I began that I knew I still had youth if I failed, so I determined to give myself 10 years to succeed as an actress."

The first film for which Wong received screen credits was Bits of Life, in which she played the wife of Lon Chaney's character. Aged seventeen, she had her first leading role in 'The Toll of the Sea' loosely based on Madam Butterfly.

"Miss Wong stirs in the spectator all the sympathy her part calls for, and she never repels one by an excess of theatrical 'feeling'. She has a difficult role, a role that is botched nine times out of ten, but hers is the tenth performance. Completely unconscious of the camera, with a fine sense of proportion and remarkable pantomimic accuracy ... She should be seen again and often on the screen."

Unfortunately, due to her being Chinese, she was not able to receive the roles she would undoubtedly have acquired otherwise.  Conscious that Americans saw her as a foreigner although she had been born and raised in California, Wong began developing her image as a flapper. This, however, did not help her find more varied parts in Hollywood and she was consistently assigned supporting roles tending towards two stereotypes: the innocent, self-sacrificing "Butterfly" and the scheming, deceitful "Dragon Lady". Her career was further restricted by the anti-miscegenation laws of Cinema at the time, which barred her from sharing an on-screen kiss with any person of another colour... even if it was an Asian character portrayed by a white actor. 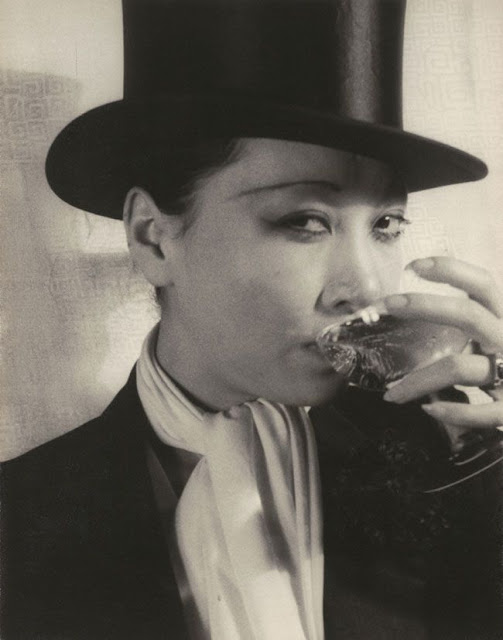 In 1928, Wong left for Europe in the hopes of finding better roles than she had had in Hollywood.

"I was so tired of the parts I had to play. There seems little for me in Hollywood, because, rather than real Chinese, producers prefer Hungarians, Mexicans, American Indians for Chinese roles...

I was so tired of the parts I had to play. Why is it that the screen Chinese is always the villain? And so crude a villain, murderous, treacherous, a snake in the grass."

Wong made movies in the UK and Germany, making her debut on the London stage with Laurence Olivier in the play "The Circle of Chalk." After receiving negative criticism for her too-American voice from the London critics, she paid a Cambridge University tutor to improve her speech, acquiring the English accent of the social elite.
Directors in Europe applauded Wong's beauty and talent, and they used her in ways that the Americans, restricted by stereotypes, never did. Continuing her career in Germany, she became acquainted with German film personalities, including Marlene Dietrich. She learned German and French, developing a continental European attitude. In Europe, she was considered a star, and was surrounded by "An intellectual elite that included princes, playwrights, artists and photographers who clamoured to work with her."

In 1929, Wong starred in EA Dupont's film Piccadilly as a dish washer, fired from her job in a London nightclub after dancing on a table, then rehired as a dancer to give the club a needed dose of exotic glamour. Unfortunately, it all ends in tragedy when she and her and her Caucasian Boss fall in love. A year later, she filmed her first talkie - Road to Dishonour, released by British International Pictures. In the years before dubbing was an option and different versions of a single film had to be filmed in different languages, Wong played her part in the English, French, and German versions of the film. 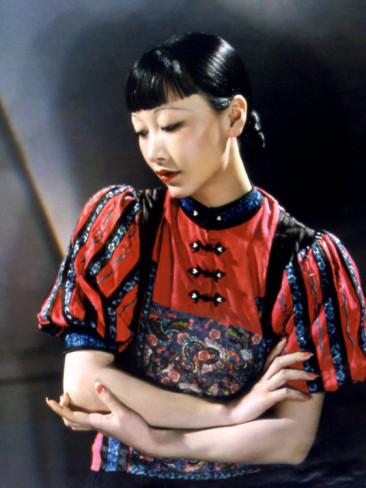 You came, you saw
You conquered me
When you did that to me
I knew somehow this had to be
The winds of March that made my heart a dancer
A telephone that rings and who's to answer?
Oh, how the ghost of you clings
These foolish things remind me of you

Wong was offered a contract with Paramount Studios in 1930. Drawn by the promise of leading roles and top billing, she returned to the United States.
Having been promised a chance to appear in a prestigious film by the studio, Wong agreed to playing another stereotypical part - Fu Manchu's daughter in Daughter of the Dragon. This was the last "evil Chinese" role she played, and also her one starring appearance alongside Sessue Hayakawa.

Wong appeared alongside Marlene Dietrich as a courtesan in Shanghai Express, upstaging Dietrich who was favourably reviewed.
Wong was seen as a fashion icon. In 1934, the Mayfair Mannequin Society of New York voted her "The World's best-dressed woman"
In 1938 Look magazine named her "The World's most beautiful Chinese girl".

In 1935 Wong had the most dreadful disappointment of her career, when MGM refused to consider her for the leading role in The Good Earth.
Wong spent the next year touring China, studying Chinese culture and visiting her ancestral village.
In the late 1930s, she starred in several B movies for Paramount Pictures, portraying Chinese-Americans in a positive light. She paid less attention to her film career during World War II, when she devoted her time and money to helping the Chinese cause against Japan. Wong returned to the public eye in the 1950s in several television appearances as well as her own series in 1951, The Gallery of Madame Liu-Tsong, the first U.S. television show starring an Asian-American.
She had been planning to return to film in Flower Drum Song when she died in 1961, at the age of 56.

How strange, how sweet
To find you still
These things are dear to me
They seem to bring you near to me

The sigh of midnight trains in empty stations
Silk stockings thrown aside, dance invitations
Oh, how the ghost of you clings
These foolish things remind me of you

Wow, I didn't know about her, she was so pretty and talented. I am now following you on GFC, I hope you will follow me back.

I never heard about her but she is so beautiful and talented!

I wish I was a vintage movie star!

If you want some cute swedish decor inspiration...check out my blog:)

Have a great week dear

love this post and also your blog! It's so nice!!! I follow you!
Pass to my blog and if it likes you follow me too, I will be so glad :D
kisses
http://francescagiusti.blogspot.com/

lovely photos:)
thank you for visiting my blog and for your lovely comments!
I'm following you via GFC would you like to follow me back?
kisses
http://styleglaze.blogspot.com

how do you not love old film stars. so glamourous

That sounds like a lot, so I'll leave the links here to make it easy for you:
Instant Milk link
Facebook page link
Bloglovin link

Amazing post! I had never heard of her but loved reading about her history in cinema. Reminds me a bit of Jennifer Fabulous' blog :)

remember im your follower? I have already been your follower long time ago and i have just made my own new blog because of your blog inspiration :)

I know your are already so famous and might not consider me but if you mind to help and support by following my new blog, i would be so thanks for it :)

I am gonna bookmark this page, thanks for info. I actually appreciate your own position and I will be sure to come back here