The Last of the Winter Snow?

The Snow is fading away in my part of the world and I have adopted a pose of melancholy in retaliation, partly out of bitterness and partly out of a strong desire to be contrary (I do not like the wet and the cold when there are no breath-taking fields of pure white to make up for it. Vivement le Printemps!) I have taken up, with great affectation, the reading of Thomas Hardy's 'The Return of the Native' and have spent days in my darkened room listening to Brahms rather too much. Do not misunderstand and choose to believe that I do not like Thomas Hardy and Brahms anyway, but consider it a sort of cumulation of mildly depressing yet intellectually stimulating diversions and maybe a form of cerebral snobbery, since I was not going to spend a couple of weeks listening to angsty teenage 'emo' music... Brahms and Thomas Hardy fool people into thinking I am cultured.

This post is another rather lazy one - simply a few pictures from an old editorial I decided to share. These were taken by Ellen von Unwerth for Vogue Italia in October 2002. The model is Natalia Vodianova and she looks wonderfully Russian is this series of photos. Fur and Ice abounding as she plays the part of a Fairytale Princess trapped in a beautiful, frozen ice (not to mention some beautiful outfits you would be mad not to wish to be trapped into)

These photos are very atmospheric and reflect my mood. Ten years after they were taken, it is the perfect time to share them, n'est ce pas? 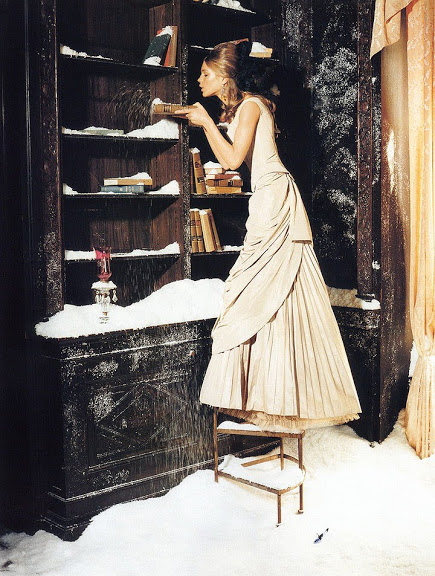 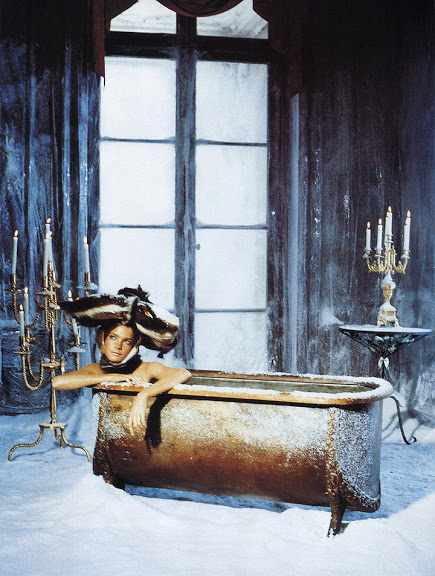 It is worth noting that those books are in remarkably good shape for having been left on a shelf covered with snow. I once accidentally dropped a book of the poems of Robert Frost from my bag into the snow when I was getting out of the car. Having not noticed, I left it there. When I found it the next day, it was more than a little waterlogged. Physics. Snow is water. Books do not like water (at least mine do not, but then again, I am not a magical Russian Princess) 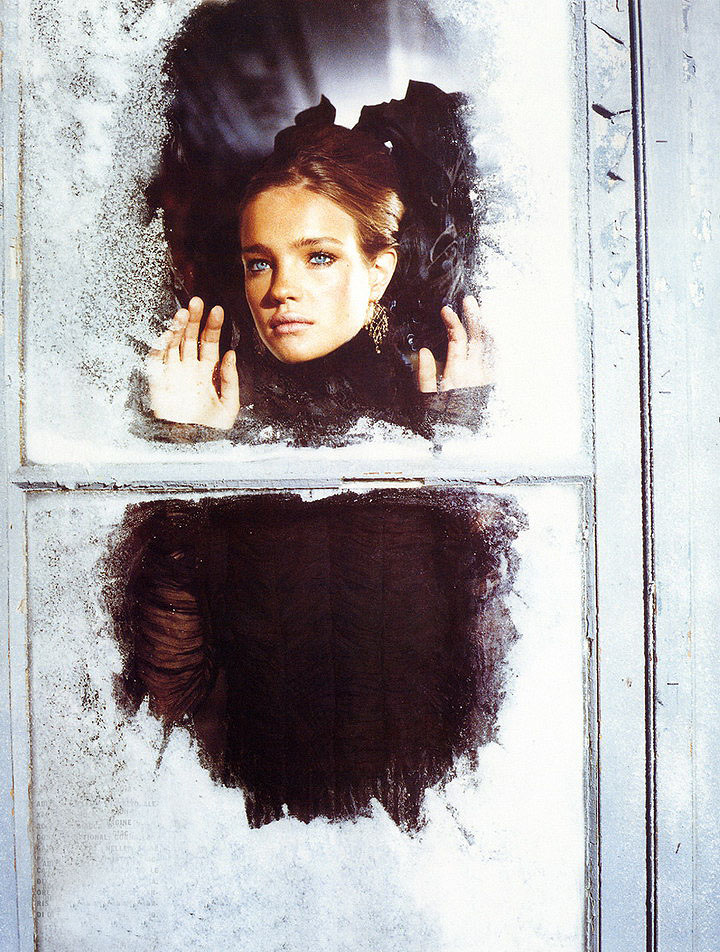 Natalia Vodianova gazes wistfully out of the window. Either that or she is silently fuming at someone or other.


I cannot say I am not worried about some water damage if that fires stays lit for much longer. It cannot be good for the walls and floors of this beautiful room for all the snow to melt away too quickly after having been there for so long. On the other hand, I must say, an admirable job was done in preventing the painting from getting frozen over. It is the only item in the room which is not! 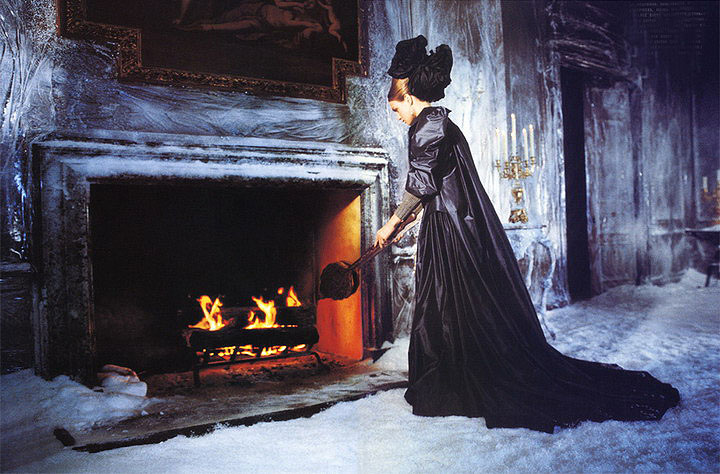 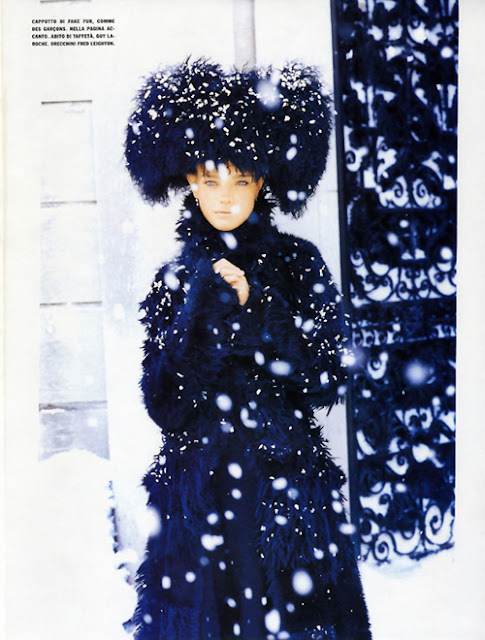 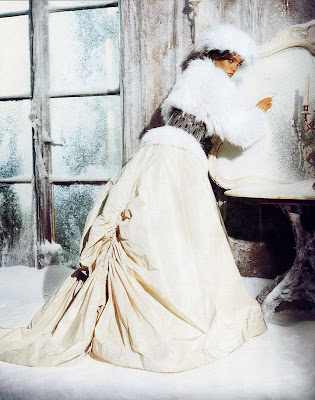 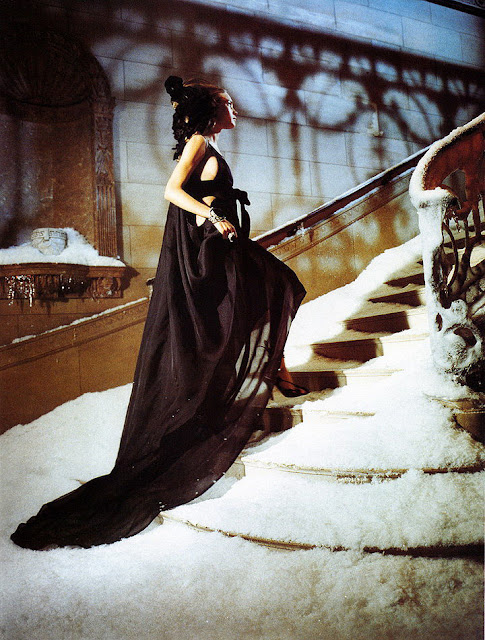 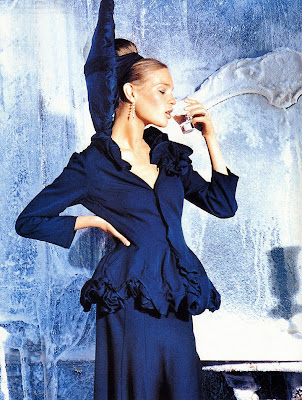 PS: This is a (Relatively, though not really) new song by Kimbra, who I think, in terms of pop singers of this generation, is rather underrated. Not only do I rather like the song, which is mildly secondary to me when it comes to anything but classical and jazz, I love the dress she wears coupled with her cute hairstyle and make-up.
Latest Song Crush: Come into my Head / Kimbra
Thank you for reading. Do follow and Please Comment.

Your writing style is delightful! Gorgeous imagery too xo

wow super lovely post!
and i have to admit you write in such a good way!
congrats
xoxo

Really nice post! I enjoyed it every word of it!

love from the NANA girls xoxo

One of my favourite editorials - I published it only a few weeks ago. :) It makes me think of Dr Zhivago and Russian winters - feels very nostalgic. x

i love the snow, its such a magical moment when it falls during winter! however it is annoying when it starts to melt and if you have it on your clothes it makes them all damp and soggy!

i love those pictures of Natalia V, she is so amazing!!
this is such an amazing post with so much inspiration!
Hope you're having a great weekend! thanks for sharing!

I have been following you for a long while now on bloglovin and I adore your style!
if you like we can follow each other on bloglovin :)
let me know!
STYLE DECORUM

I truly love this editorial with Natalia. She's a true Russian beauty