A Navy Ensemble and Le Boléro 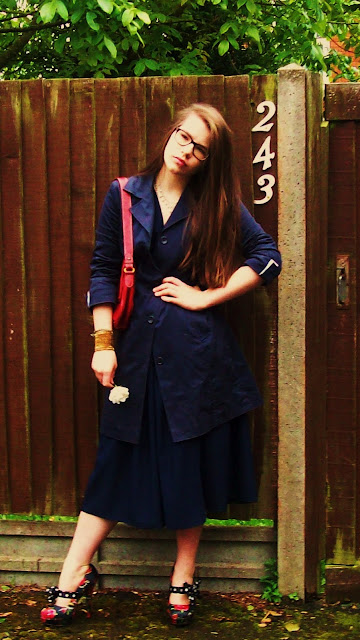 Salutations People! I am afraid this shall not be a very fashion/style orientated post - do not worry though! I shall be back to my usual  raving on the subject of clothes by my next post, where I promise sincerely to post the second half of my Dior Retrospective. Cross my heart and hope (not) to die.

Today, I'm sporting my understated colour of choice, Navy! I spent half of the more formal side of my childhood wearing Navy. There are many lovely photos of a three year old moi wearing little sailor dresses, the likes of which I cannot find to suit an adolescent moi. I'd have to order some sort of japanese schoolgirl uniform, which is not really what I want... but I shall not give up on the idea of eventually finding 'mon idealle' and when I do find the perfect sailor dress, or top, then you shall be the first to know!

You can take a glance at the two looks - One is Kenzo Spring 2006, the other is Sonia by Sonia Rykiel.

So, my ensemble is a navy coat, with a striped lining, a navy wrap dress with gold buttons borrowed from my Mother, my platform heeled iron fist shoes with flowers, my red radley handbag, a couple of necklaces - one longer than the other, one golden coloured and the other silver - and a golden wristband bracelet from Ruby Loves. It's a very laidback and simple ensemble, as in it doesn't shout, "Look at me!" if I'm going out. It just feels sort of elegant. :) 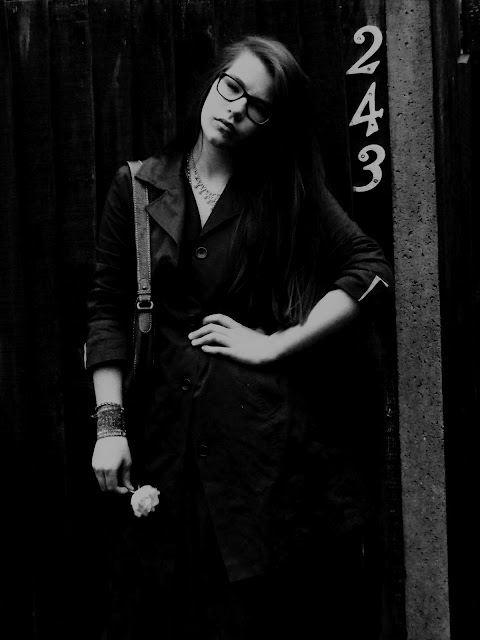 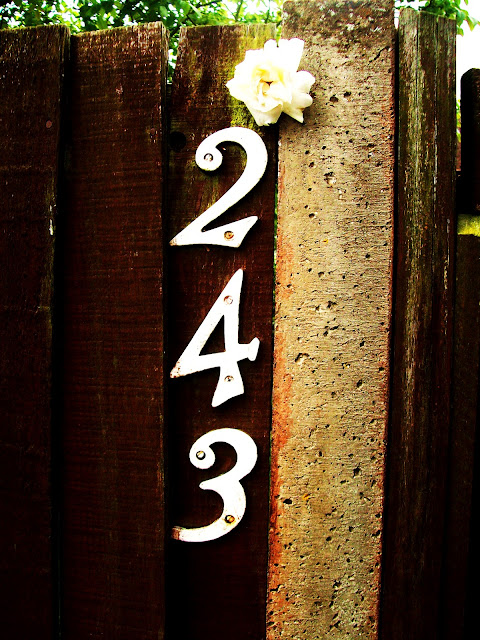 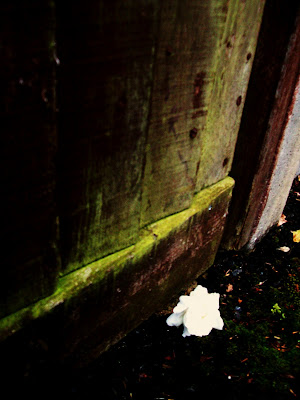 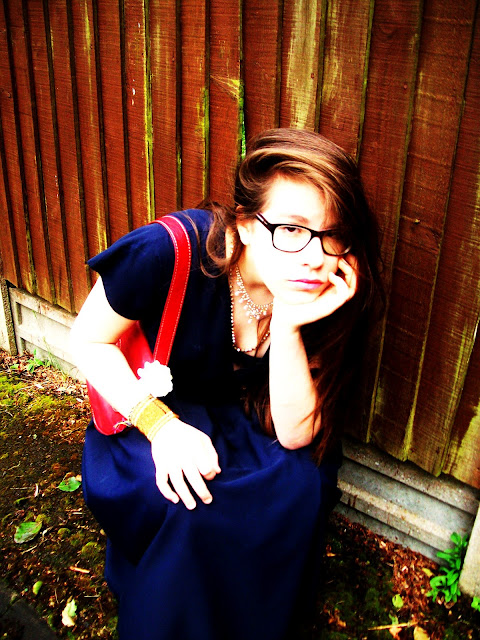 I have also, of course, spent a great deal of time surfing the internet and, more specifically, Youtube where I have had the time to find some real gems, from fantastic music videos for music I had never heard before and pieces of documentaries, to clips from films which are now on my 'MUST WATCH' list. I have chosen one of these impressive videos to share with you, chosen because of its artistic merit, the simplicity of colouring to create a very striking effect and the beautiful choreography by Maurice Béjart, to the tune of 'Boléro' by Ravel. It is worth taking a few minutes to really watch. The dancer is Jorge Donn, an internationally-known argentinean ballet dancer born in 1947, best known for his work with the aformetnioned Maurice Béjart's Ballet company, and his participation as lead dancer in Claude Lelouch's film Les Uns et les Autres. He died of AIDS on 30 November 1992 in Lausanne, Switzerland.

If you do watch it, do turn the quality up to 1080p - it's not perfect imaging, but it is worth doing.

Your look is so interesting, so old-school! I really like it !!

Well the film isn't that deep as I'was expecting... yes is based on a Nicholas Sparks' novel but isn't exciting :/
You have such a nice style! :)

I am a huge fan of nautical styling and love a sailor dress!

Thank you for your comment on my blog. You've got a really interesting space here.
XX
The Fashionable ESQ
http://www.thefashionableesq.blogspot.com/

love it!
i just discovered your blog and i'm loving it! :)

Wow your blog is cool!!!

thank you for visiting my blog! I love your's! Want to follow each ohter?

Hello Zoé!! Thanks for your visit and kind comment on my blog!! I think that your blog has something different and romantic so I’m following you on GFC. I invite you to visit mine and if you like it feel free to follow!!
BTW I love the video. I’m also a dancer and this performance is simply amazing.
xoxo
Patricia

Love your outfit!
Thanks for your lovely comment on our blog!
if you want to visit us again and we want to follow us reciprocate!
Kiss kiss from Italy:)

are you kidding me? you're just perfectmy darling Zoe!! :)

IT"S SO PRETTY! navy is so in, i just saw M.A.C newest make up collection based on that lol. hope we could follow each other

Love the outfit! I'm really into the nautical style too.

Your posts are always very elaborate and interesting!
I can see you put a lot of feelings in them!
Kisses

Great blog!! Hope you visit mine!

Thanks for your visit :)
Marino style - I like so much :)

Hi Zoe ;) Thx for comment. You have very cute blog!

I love the navy, you are such an eloquent writer! I recently stumbled across your blog and I LOVE it! I love the layout to the content and everything in between! Your sense of style is just impeccable and your blog is simply the epitome of perfection! I am your newest, most avid follower, I look forward to reading your future posts. I would love it if you could perhaps follow me back too? Have a lovely day!

Thank u for commenting on my blog! Your shoes are amazing, really. I have been on the verge of buying Moll Flanders, and always I end up getting some other book... one day I swear I will read it! Wanna follow each other? xoxo
http://fashionfauxpas-mintjulep.com

that is such a wonderful theme! i like blue marine a lot, i feel i can mix it with something edgy like leather or some sort. hope to hear back from you on our website! check out our new post! HIMandHERproject

i love these looks!!!
following u now x

Say meow to me on:
Miss Kwong: From Catwalk to Classroom

Thank you so much for the comment and for following my blog!! I am following you back with pleasure!!
:)
Allison
A's Fashion Files

thanks for you sweet comment on my blog, Zoe! adore your style dear!! following youu xx

Thank you for your lovely comment on my blog. Love your blog so much and am following you now!

Thanks for the lovely comment on my blog dear :0 following you now :)

and your blue dress is lovely..and i liked you shoes too!
and I guess I have to read the book after your review..
take care :)

I love navy...especially in summer i'm wearing this color all the time.Amazing post!You look really nice.I love your dress and the shoes:)

Navy is one of my favourite colours ever! <3 You look fab in the all navy outfit, I love how the floral shoes pop, so eye-catching!

Lovely outfit! Good luck in finding your perfect sailor top/dress, there's quite a few of them around but very few look good unfortunately. Thanks for dropping by my blog!

Excess:
Oasap is giving away 152 silk dresses and blouses!
http://carmiscaprice.blogspot.com/2012/06/oasap-super-give-away-of-152-pieces-of.html

I love your whole look and it's lovely to find someone as interested in reading as I am! Thank you for the lovely comment on my blog :-) Do you want to follow each other? Let me know!
www.whatwillshewear.blogspot.com

Thank you for the lovely comment on my blog!!

I love your dress! These are beautiful photos :)

Thank you for visiting my blog. Hope to see you there again =)

Thank you for visiting my blog!

Yours looks nice too!

Thank You so much, thats sweet;)
I love
Your Blog, nice here:)
Kisses from Poland!

you look great, and navy really is a fabulous color. i think it is really linked to collegiate prep wear and the sea. i am loving that kenzo dress so much though. it is nice to see an updated sailor inspired dressed that is still fashionable and not bordering on cosplay. great post. haven't ever read Moll Flanders, but i will take a look.

I really like how you carried that trend out, it was even more fabulous than on the runways!
I say that because I think that fashion bloggers are far more natural than the models, because they always wear what they like and add a personal touch to every look. ;)
I'm following you now. :D If you want, you can find me on: http://the-wandering-heart.blogspot.com
Have a nice day! Kisses from Serbia! :*

Thanks for visiting my blog. :)

nice, so cool outfit,,, i o love this style!

You have such a cool blog! I love your photos! Your navy ensemble is casual, classic and chic. I love it! Thank you for visiting my blog! I hope to hear more from you. You'll definitely hear more from me :)

Loving the sailor dress!
Thanks for visiting :)

M really liking the look!! i love the pic of you holding the flower!! :)

I really liked your blog!!

Thank you for stopping by my art blog and for the lovely comments..

Do check out my other blog..
www.thedoublemlife.blogspot.com

M following you now!! hoping to see you in my friends list!!

Thank you very much! Your blog is cool and I will follow it now!

I just adore your outfit!
Thank you tons for visiting me and leaving such a nice comment!:)

great blog, you're adorable! thank you for your comment :)


Thank you for your sweet comment on my blog. What do u think about follow each other? ;)

I'm in love with your shoes!

The coat is absolutely amazing :)
xx

That is a gorgeous dress, the sailor look is great as it comes back every year =]

Thanks so much for stopping by sweetie, I am your newest follower! Would love if you followed back!:X

Hi, this is so lovely post. It's so pretty vintage style.

Have a nice day

navy is my black

What a vintage look! I love it...I think we have the same glasses! Thanks for your comment in my blog,maybe we can follow each other,if you want of course...
-xxxx-
vivesolosondosdias.blogspot.com

i really love the dress! such an original look! :)