Howdy - and after a long absence dedicated to decorating Christmas Trees, learning lines for plays, coming up with a few designs and wrapping up presents I spent too long choosing from a wide assortment of charity shop bits-and-bobs, I'm back! ...and hopefully I shall never disappear for so long again. Yes, this may prove to be the biggest bite-my-tongue moment of the last year, but I have honestly gone past caring. So, where am I now? Planning the new year ahead with a violent mix of apprehension and ambition to make it work. Wondering how long that will last and if, now I have set a target in place, I really will be vigilant and determined enough to write one hundred blog posts in a year, specifically next year. 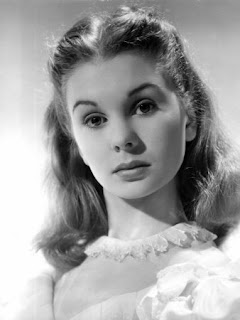 In the mean time, feeling the post-Christmas winter blues while finishing a glorious christmas with leftover turkey, pottering about in a new nightgown reading books by Maugham and looking forward to tonight's finale of the BBC's Great Expectations (which honestly, fits in well with my mood) with the brilliant Douglas Booth, although I was not really paying attention to his acting and maybe he is a little 'pretty'. On that note, although Estella is supposed to be cold, is she not also supposed to be a little more... beautiful? Maybe this is simply personal opinion but she left me perplexed. It would have been alright if everyone hadn't been repeatedly saying how stunning she is. On the other hand, how can one not fail to be disappointed with this modern interpretation of Estella after seeing the timeless beauty of Valerie Hobson in the 1946 version of the story? Or indeed Jean Simmons as the younger Estella.

Apologising for that minor tangent, and returning to the question at present. How have I been looking at the world of Fashion and Style for the last few days. Well, I appear to have had a personal renaissance of interest in the 1920s. The upcoming 'The Great Gatsby ' film, set for release in almost exactly a year, starring Carey Mulligan and Leonardo DiCaprio, can only whet the appetite of the fashion world. The Spring/Summer 2012 collections were littered with 20s inspired threads. I might consider this a silent curse since the twenties waistline is not always one that flatters my shape, but I am optimistically looking forward to trying the trend. 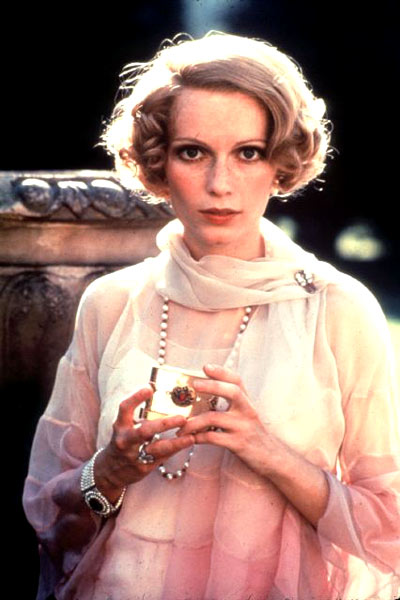 Will this style forever be popping back? Highlighting an enduring admiration of the roaring twenties with its freewheeling, popular culture and exhuberant zest for change in society, for the young and rich at the very least.

This change, concurrent with a rejection of traditional moral standards, is apparent in much more than simply clothing. Take for example, the Weimar Republic period Artists, labelled as 'degenerate' by the Nazi regime using the sudden liberation of the 1920s to create a boom in the satirical and grotesque, with expressionism becoming a feature. Groups and Movements such as Bauhaus, New Objectivity and Plakatstil gained a place in Art History which they have never relinquished.

I would continue on this route of expression and sustained education of the masses (Hmph) but can really not be asked. I can only hope this has given you something to think about. What inspired the clothes as well as how stunning they are.

Do you recall back far enough to remember Ralph Lauren's gorgeous Spring 2012 pret-a-porter collection? Some of you (certainly not me) may even recall the year the 1974 film 'The Great Gatsby' came out, with Ralph Lauren contracted to provide clothing styles for the movie. Well, with the future release of the afore-mentioned Baz Luhrmann film, 'The Great Gatsby' Ralph Lauren seems to have revisited this aspect in the clothing. 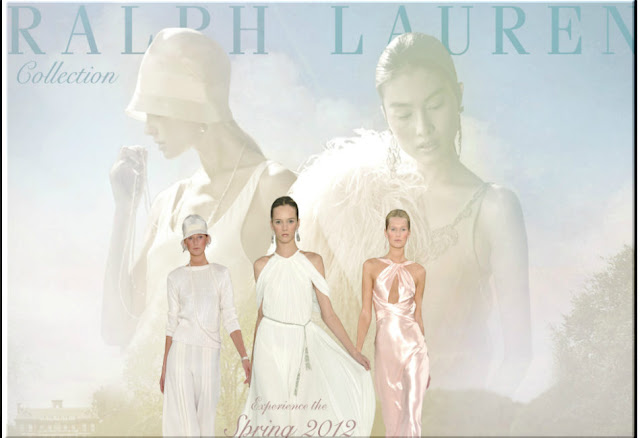 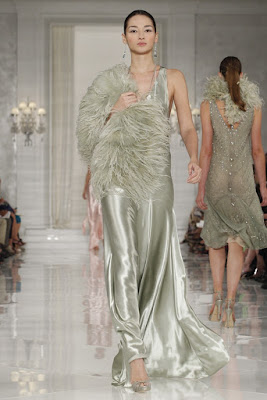 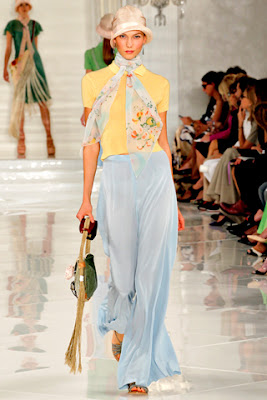 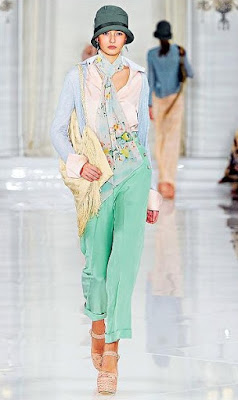 The collection was filled with feathers, cloche hats and scarves galore.
Many different distinctive styles were used in contrast, from the masculinity and forms of suits teamed with hats and pearls, to the floaty and floral gowns swimming behind as the models glided down the runway. The collection was all very pastel coloured and summery with bolder evening gowns reminiscent of Old Age Hollywood Glamour contrasted with the easy elegance of the daywear.

So yes, although I did first glance at this collection towards the twenty-somethingth of September, I wished to come back to it now in line with my general mood. 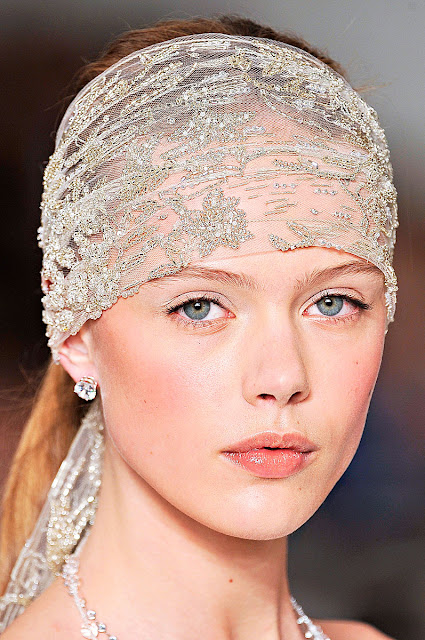 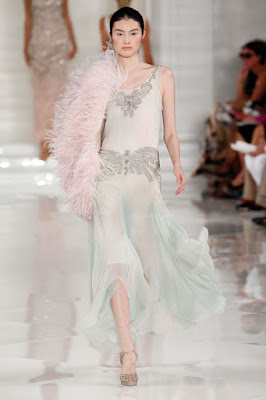 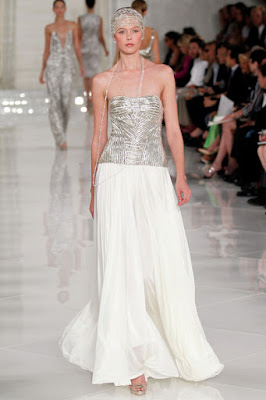 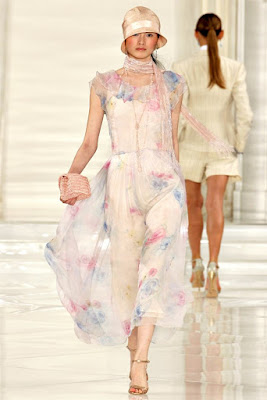 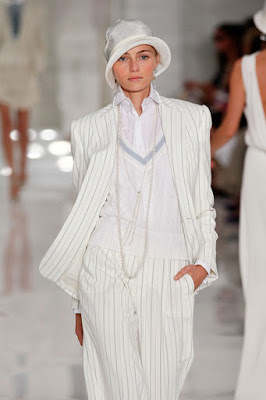 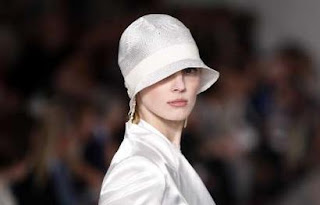 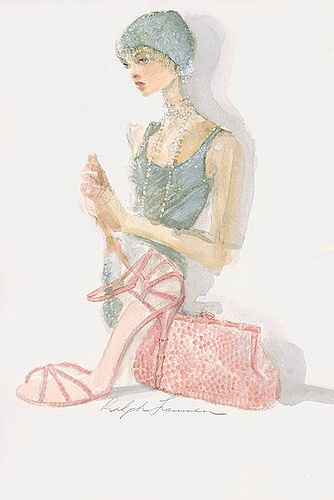 Hello!
i am a new reader of your blog, and i have to admit that your blog is one of the best blogs i've ever read, no kidding here.
the way you manage to talk about fashion, art, poetry, philosophy, your way of writing a post itself is stunning and i find myself impressed of it and a bit jealous, and again impressed, and inspired and wanting to be able to write that way one day.
i have a blog too, a humble one though, its called lureofthedarkside.blogspot.com and i would be very happy if you checked it out and told me what you think. your opinion does matter to me since you seem as the right kind of person to comment and judge in a constructive way and that's the kind of reader i am searching for. and not the one that writes :great post, follow me or something similar.
i would appreciate it, i am not asking you to follow me or anything like that, since that would be selfish of me to do but if you checked it out i would be so happy about it.
please be honest and tell me if u don't like it though.
back to your post after my long dialogue about my blog for which i apologize for, 20's is a fascinated period of time for me, i was always impressed by the art, poetry, fashion and music of that era and the great gatsby couldn't be an exception.
as for the video you posted i watched it so many times that i can't even count the number of it, music and movies like that don't come out anymore, which is a very sad thing.
again i am very much impressed by your blog and your writing, mesmerized i would say.
i am sorry for the extremely long and tiring comment i hope that i am not bothering you in any way.
marianne

By the way i miss your old posts about all the things that you love-appreciate, and all the things you find hilarious.
please write something similar again.
i found myself laughing so loudlywith your comment on justin bieber's new perfume.
it was delicious to read.

Hey! Great blog!!! I was going to write a nice long comment but, seeing the one above and judging that everything I would have to say was already said (give or take a few!!) I will simply state that you have a grrr-eat blog!!!
And I agree with the Biebs perfume comment although (sssh) I secretly dont think he's that bad. :P

Love your blog loads and loads! Will keep checking up. So you better keep your side of the bargain and keep posting!!!

hi there, you've commented on my blog regarding the cracked manicure. It hasn't been done one by one, there is a nail polish that crack by itself while drying, easy peasy!!

hello, first let me thank you for commenting on my blog :D it made me so happy to read your comment, i am glad that you like it, i am still struggling with it and the support i get gets me going.
i am suprised to read from the other comments that i said all the things they wanted to say.
wow really suprised.
consider me a follower from this moment! you didn't even have to say it, i would follow you no matter what.
greetings from http://lureofthedarkside.blogspot.com/

Wow , really lovely collections you show on your blog and i love the personal photos you add yourself!! Thanks for stopping by my blog and leaving such a sweet comment !! Kisses xo